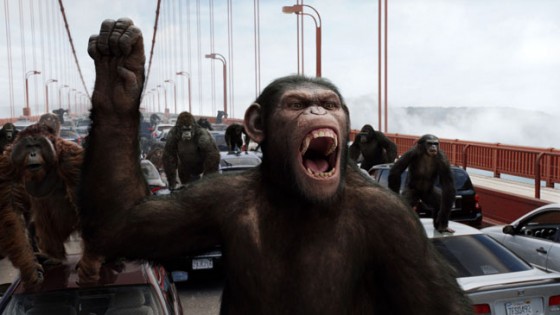 The latest entry in the Planets of the Apes franchise, Rise of the Planet of the Apes, is in theaters this weekend (and getting surprisingly good reviews) and it seems like the perfect time to take a look back at the franchise, starting with the 1968 classic original going all the way to the Tim Burton “reimagining” 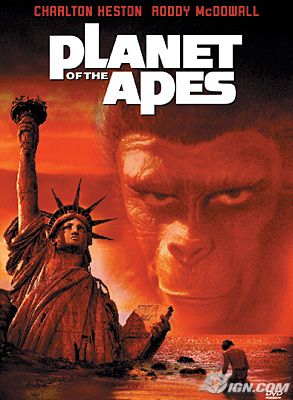 Planet of the Apes (1968): The original Planet of the Apes is a sci fi classic that is essential viewing, if only to understand the hundreds of parodies and references to it.  Charlton Heston stars as astronaut George Taylor, who is part of a crew on a 2006 year, light speed voyage.  He and his crew crash land on a planet and discover it is populated by intelligent apes, who hunt and enslave the primitive humans.  Taylor’s fellow astronauts are systematically killed by the apes but Taylor is saved because he catches the eye of ape scientists Cornelius and Zira.  With their help, Taylor escapes with a female slave named Nova and heads into the “Forbidden Zone”, where he discovers that the planet is Earth after finding the remains of the Statue of Liberty and realizes humanity must have finally wiped themselves out with a nuclear war. 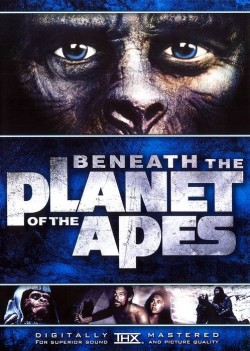 Beneath the Planet of the Apes (1970): Picking up where Planet of the Apes left off, Taylor and Nova continue deeper into the Forbidden Zone but get separated when the ground opens up with chasms and fire. Elsewhere, another US spaceship crashes onto the planet and the only survivor, Brent, makes his way to shore and finds Nova.  Brent was part of a search and rescue mission to find Taylor and his crew.  Brent sees that Nova is wearing Taylor’s dog tags and follows her to the ape capital of Ape City, where they see gorilla General Ursus gathering troops to march into the Forbidden Zone to capture it as a new food source.  Brent and Nova are captured by the gorillas but Zira helps them escape into some nearby caves, which Brent is shocked to discover is the Queensboro subway station.  Following the subway tunnels, the pair discovers a strange cult of humans who worship a golden doomsday bomb.  Due to years of radiation exposure, the humans are horribly mutated and have telepathic powers.  After being questioned, Brent is thrown into a cell with Taylor and the pair manages to escape in the chaos of the gorillas attack on the cult.  The cult plans to detonate the bomb and Brent and Taylor attempt to stop them but Brent and Nova are killed by the gorillas and Taylor is mortally wounded.  Dr. Zaius, who wanted to experiment on Taylor in the original Apes, arrives and ignores Taylor’s pleas for help.  Taylor decides to use his last bit of strength to detonate the bomb, destroying all life on Earth. 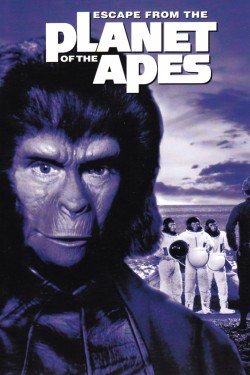 Escape from the Planet of the Apes (1971): While the gorillas and doomsday cult battle in Beneath the Planet of the Apes, Zira, Cornelius and their friend, Dr. Milo, have managed to repair and launch Taylor’s spaceship.  Passing through the shockwave of the doomsday bomb opens up a time rift and sends the three apes back to 1970’s Earth, specifically Los Angeles.  After landing, the trio is sent to the Los Angeles Zoo for observation by scientists Stephanie Branton and Lewis Dixon and they reveal that they are intelligent and able to speak.  Unfortunately, Milo is killed by a gorilla.  Zira and Cornelius are introduced to the world and become celebrities but they catch the attention of the President’s Science Advisor, Dr. Otto Hasslein, who wants to find out how they got Taylor’s spaceship and how apes took over the planet.  Hasslein is horrified to learn that Zira is pregnant and eventually learns that she used to dissect humans.  After Cornelius accidentally kills an orderly who calls their baby a “little monkey”.  Hasslein gets a presidential order to have Zira’s baby killed and Zira and Cornelius sterilized and Zira and Cornelius escape to a circus thanks to Stephanie and Lewis.  Zira gives birth to a baby they name Milo.  Hasslein knows that Zira was due any day and orders troops to search every zoo and circus in the area.  Lewis gives Cornelius a gun and he, Zira and their baby flee to the nearby marina and an abandoned ship.  Hasslein kills Zira when she refuses to hand over her baby and also shoots the baby as well.  Cornelius kills Hasslein but is shot himself by a Marine sniper.  In a twist, the baby Zira and Cornelius had with them was a normal ape baby and Milo is left in the care of circus ringmaster Armando. 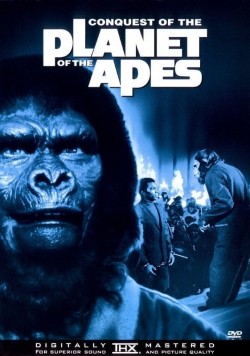 Conquest of the Planet of the Apes (1972): In 1991, baby Milo (now calling himself Caesar), is a performer in Armando’s circus.  A disease has caused all the dogs and cats of Earth to be killed and humans decided to take in various primate species as their new pets.  They eventually learned that apes could be taught to do various menial tasks and now society runs on the backbone of ape slave labor.  While handing out fliers, Armando and Caesar see apes being treated horribly and Caesar yells out “Lousy human bastards!”.  Armando quickly covers for Caesar with the police, since if it was discovered that Caesar was the son of Zira and Cornelius, they would both be killed.  A crowd overhears the confrontation and becomes agitated.  Armando and Caesar quickly run off and Armando says that Caesar should lay low while Armando goes to smooth things out.  Caesar hides with a bunch of fellow apes but finds that the group is being trained for slavery.  Caesar is sold to Governor Breck and is put to work by his African American aide, MacDonald, who sympathizes with Caesar and eventual figures out who he actually is.  Meanwhile, Armando is questioned by Police Inspector Kolp and is forced into an “authenticator machine” which will force him to tell the truth about Caesar.  Armando breaks out of the device and fights the guards, but slips and falls out a window to his death.  Caesar learns of this and, with his foster father killed by his fellow humans, loses faith in humanity and plans a rebellion.  Caesar teaches his fellow apes combat techniques and has them gather weapons.  Caesar and his army march on the Ape Management building and succeed in taking it over and capturing Governor Breck.  Caesar is about to execute Breck but a female ape named Lisa asks him to stop.  Caesar agrees and leads the apes off to form their own society. 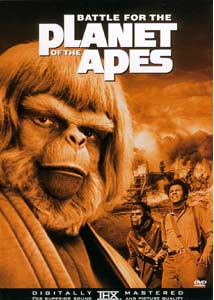 Battle for the Planet of the Apes (1973): 10 years after the Ape rebellion, Caesar is the leader of a society of apes in Ape City.  Caesar wants to attempt to live in peace with the surviving humans but gorilla General Aldo wants to wipe them out.  Caesar wants to learn more about his parents and MacDonald, now Caesar’s assistant, suggests he go to the Forbidden City where he can watch the archived footage of Zira and Cornelius’ arrival in LA.  The Forbidden City is home to angry, irradiated humans and Caesar just barely manages to watch the archives before getting chased off by the humans.  The humans, led by Governor Kolp, take Caesar’s entrance into their city as an act of war and set out to destroy Ape City.  Aldo, meanwhile, plans a coup and murders Caesar’s son, Cornelius.  The humans manage to break through the defenses of Ape City but are outsmarted by Caesar and his troops, who pretend to be dead and ambush the humans as they pass.  The humans are captured and Aldo demands they be killed by Caesar refuses and Caesar declares that Aldo broke the most sacred law of Ape society, “ape must not kill ape” and chases him into a tree.  Aldo loses his footing and falls to his death and Caesar releases the humans but they refuse to leave unless they are treated as equals by the apes.  Caesar agrees and a flash forward in time reveals that the future has changed from the one Taylor stumbled into in that apes and humans live together in peace. 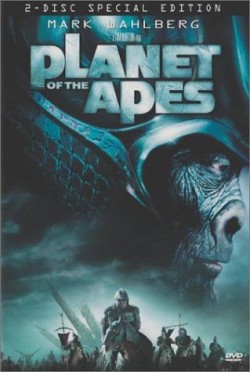 Planet of the Apes (2001): Tim Burton’s “re-imagining” of the original Planet of the Apes had some impressive costumes and sets but Burton probably should have spent more time on the story and, especially, the horrible ending.  Mark Wahlberg stars as astronaut Leo Davidson, who is stationed on the US Space Station Oberon.  An electromagnetic storm suddenly appears near the station and chimp name Pericles is sent in a pod to investigate.  Pericles disappears into the storm and Leo, against orders, gets in a second pod and goes in pursuit.  Passing through the storm, Leo crash lands on a planet in the year 5021 (Leo came from the year 2029) and discovers that a race of intelligent apes control the planet and have enslaved the human population.  Leo is captured but is bought by kind female ape Ari, the daughter of an ape senator.  Leo and a female slave named Daena lead an escape of the human slaves and manage to convince Ari to escape with them.  The group flees toward the Ape holy site of Calima with the ruthless General Thade in pursuit.  Leo is shocked to discover that Calima is the remains of the Oberon (the name Calima coming from the only letters of “Caution Live Animals” that remained on a wall).  Leo finds the logs of the Oberon and learns that the apes, led by a chimp named Semos, stage a mutiny and the battle caused the Oberon to crash on the planet.  The surviving apes and humans left the wreckage and set out to settle the planet.  Leo leads the humans in battle against Thade and his troops and manages to turn the tide by setting off the Oberon’s rocket boosters.  In the middle of the battle, Pericles arrives in his pod and the apes take this as the arrival of their god, Semos, and bow to him.  Only Thade is unimpressed and chases Leo into the Oberon.  After a fierce fight, Leo manages to lock Thade in the pilot’s deck.  Leo leaves Pericles in the care of Ari and the humans and takes Pericles’ pod to travel back through the electromagnetic storm and, hopefully, return to his own time.  Arriving back in 2029, Leo makes his way to Earth and crash lands in Washington D.C.  Leo is shocked to find that somehow apes have taken over the planet and the Lincoln Memorial is now a monument to General Thade.