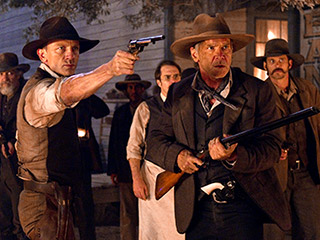 The latest summer blockbuster from Jon Favreau, Cowboys & Aliens is the latest of this year’s increasingly numerous alien invasion movies but the Wild West setting and a pair of bad asses in the lead roles makes it a fun, if kind of dumb, summer action movie.

Cowboys & Aliens follows Daniel Craig as amnesia stricken outlaw Jake Lonergan, who wakes up in the desert with no memory and a mysterious device attached to his wrist.  Making his way to nearby town of Absolution, Jake runs afoul of both the local sheriff and ornery cattle baron, Woodrow Dolarhyde (Harrison Ford).  All their disagreements are quickly thrown out the window however when the town is attacked by alien spacecraft, who capture a number of townspeople.  Jake, Dolarhyde and a posse of townspeople then head out to rescue their friends and family.

Cowboys & Aliens is actually an extremely competent western with all the standard western characters you would expect, played by some great supporting actors like Sam Rockwell, Clancy Brown and Walton Goggins.  Daniel Craig is great as the quiet bad ass and is actually pretty successful at adopting an American accent (unlike say Liam Neeson).  Harrison Ford is also great as the extremely surly Dolarhyde, who growls at anyone who questions him.  A slight criticism about his character is that he switches gears a little too rapidly from our introduction to him as he’s about to draw and quarter one of his incompetant cattle hands to bonding with the young grandson of the captured sheriff toward the middle of the movie.  If this had been a standard western, Ford’s character would unquestionably be the villain.  It’s never quite clear what the movie is trying to do with Olivia Wilde.  She’s supposed to be this mysterious character and there is a twist to her before the final act but they just say it and move on with no explanation.

Not explaining things is probably the biggest criticism against Cowboys & Aliens.  They establish a bunch of concepts but fail to really explain them or explain some of their most interesting concepts in an uninteresting way.  Slight spoilers to elaborate but for instance, the aliens, it’s revealed, are on Earth to harvest our gold resources.  Olivia Wilde’s character, Ella, explains that “it’s as rare to them as it is to us” but that’s the only explanation given for why the aliens want the gold.  We see a massive mining operation later in the movie but they never explain what the aliens are using the gold for, where it goes, etc.  Things they do explain, like how Jake gets his wrist device and memory loss, are kind of underwhelming after a whole movie of build up.

Another quick criticism is that the movie relies on some pretty cliche and cheesy emotional moments, especially toward the end.

On the positive side, the action is, for the most part, extremely fun.  The aliens penchant for kidnapping people by lassoing them is crazy but it’s fun every time it happens and the ships themselves are a pretty unique design; they’re kind of dragonfly like.  The aliens look cool as well but they aren’t the most original looking aliens, following the big, brutish look of many other movie aliens.  Seeing cowboys (and eventually Native Americans) trying to figure out how to fight these high tech aliens with six shooters, bows and spears gives Cowboys & Aliens a unique and entertaining distinction among the other alien invasion movies and shows that have come out or will come out this year.  The movie also looks great with fantastic scenery and special effects.

Cowboys & Aliens is not the best movie to come out this summer but it is a fun way to spend a couple of hours at the multiplex, probably as a matinee.  It’s an entertaining mash-up of two genres with a couple of great leads and a strong supporting cast that might have been a great movie if it had focused and explained some of it’s concepts in a more interesting way or at all as the case may be.