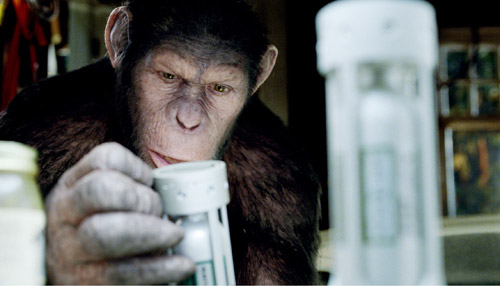 After ten years of lying in wait, the Planet of the Apes franchise came thundering back this weekend as Rise of the Planet of the Apes easily took the weekend with $54 million, the fifth best August opening of all time.  It was less than the Tim Burton remake of the original made on it’s opening weekend but that movie benefited from being based on the original classic while Rise is essentially a remake of the fourth sequel, Conquest of the Planet of the Apes, a slightly less beloved movie.  Reversing their roles from last weekend, The Smurfs moved past Cowboys & Aliens for the second spot with $21 million while the latter made another $15.7 million.  Fourth place went to The Change Up with a middling $13.5 million, which is terrible compared to the other R rated comedies that have been released this year and it’s also terrible compared to other recent “body swap” comedies like 17 Again, Freaky Friday and 13 Going on 30.  Captain America rounded out the top 5 with $13 million.  In other box office news, Harry Potter is expected to become the highest grossing movie of the year by tomorrow, taking the title away from Transformers.