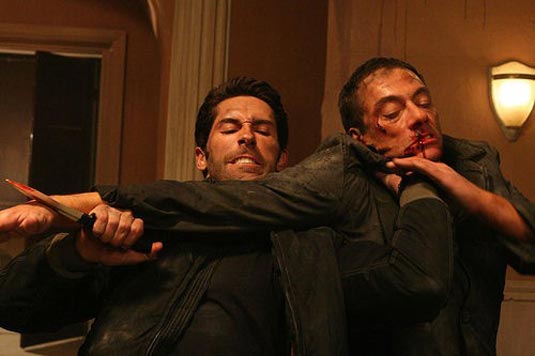 Jean Claude Van Damme continues his “comeback” that started with his shockingly good performance in JCVD by teaming up with up and coming martial arts action star Scott Adkins for Assassination Games.

The movie follows Van Damme as veteran hitman Vincent Brazil and Adkins as former Interpol sanctioned assasssin Roland Flint, who are both given the opportunity to take out Romanian crime lord Polo Yakur.  In typical comic book fashion, Flint and Brazil get in each other’s way and have a “misunderstanding” fight before deciding to team up to take down Polo, since Roland is only in it for revenge for his wife, who Polo beat into a coma.

Van Damme is doing his best “Jean Reno in the Professional” impression and features a number of similarities to that classic movie hitman.  He lives in a crappy apartment building with neighbors who are constantly fighting, he has a pet turtle (Leon had a pet plant) and he tries to avoid relationships but a girl manages to work their way under his skin (in The Professional it’s Matilda, in Assassination Games it’s a hooker with a heart of gold).  I don’t know if it’s just because he physically can’t do as much as he could back in the 90’s but Van Damme is definitely trying to up his acting and he’s decent in Assassination Games.  Nowhere near as good as JCVD but he’s proving that he might be one of the best actors of the action hero pantheon.  Scott Adkins is solid as well, although his only emotion is intensely angry.  Ivan Kaye is cartoonishly evil as Polo Yakur but it makes it that much more satisfying when he gets his inevitable comeuppance.  Everyone else is predictably terrible, in particular Van Damme’s love interest, Marija Karan.  It really makes the scenes where Van Damme is supposed to be opening up and caring about someone not work and drag the film down.  Bringing The Professional back up again, not every hitman movie that comes out has to have the hitman learning to love and care.  Ever since The Professional everything from Assassins to Hitman have tried, and failed to replicate that aspect of The Professional.  The movie already had a competent emotional hook with Scott Adkins comatose wife, so the Brazil/hooker scenes just takes away time that could have been dedicated to more action.

Action wise, the movie is solid but not going to revolutionize the action genre.  Scott Adkins gets numerous abilities to show off his sick martial arts skills and Van Damme gets a couple of bad ass moments as well (especially his opening hit during a Russian mob wedding). There are some clever moments like, for instance, *spoilers* when Brazil and Flint go to interrogate one of Polo’s weapon dealers and use a laser guided machine gun to intimidate him.  After getting the info they need, Flint makes an off handed comment that they should take the machine gun to make it look like a break in and Brazil jokes that they should take something lighter.  Fast forward to the final showdown in Flint’s house and it’s revealed that they actually did steal the machine gun and it plays an integral role in getting them out of a jam.  That attention to detail puts Assassination Games slightly above it’s lower budget action competitors.

I’m not sure if it’s a stylistic choice but I’ve noticed in a couple of recent Direct to DVD movies (although just to note, Assassination Game is in limited release in theaters) that they have a weird yellowish filter.  Dolph Lundgren’s “The Killing Machine” had a similar filter and at first I thought something was wrong with my TV.  Making your movie look like someone pissed on the film is probably not the best way to attract people to your film.

Assassination Games, as I mentioned, is in very limited theatrical release right now and is also available on your On Demand video platform of choice.  If you’re a fan of Van Damme, I’d say it’s worth a watch and it’s a competent hitman movie.  A low budget latter day Van Damme movie is still infinitely better than a Steven Seagal direct to DVD movie and hopefully he makes a return to more mainstream movies in the near future (possibly starting with The Expendables 2!).