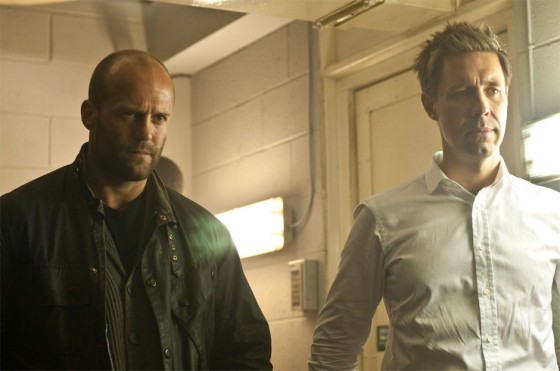 Jason Statham is, arguably, the greatest action star currently working.  Later next month he has the bad ass looking Killer Elite coming out in theaters but, bizarrely, this week another of his recent movies, Blitz, has come straight to DVD after getting a theatrical release in the UK.  Is this release strategy a sign of it’s quality?

Statham stars as London detective Brant, who gets into hot water early in the movie by assaulting a trio of hoodlums with a hurling bat.  Brant is told to keep a low profile but the entire department is put on alert when a vicious killer calling himself “Blitzkrieg”, or “Blitz” for short, starts killing cops.

If you’re looking for the usual Statham action fest, Blitz is probably not going to the movie for you.  It’s actually much closer to the Dirty Harry movies as it’s Detective Brant trying to find one killer.  There’s no car chases, army of henchmen or gunfights but it’s an extremely solid procedural as Brant and his main ally, Inspector Nash, try to piece together the clues.  Statham is still his usual bad ass self, even if he’s not constantly punching people.  The movie also dedicates a lot of time to the killer, Aiden Gillen, who is a great combination of arrogant, unnerving and creepy (and much better than his last villain role in 12 Rounds).  There’s also a subplot involving Brant’s friend, who is a recently rehabiliated undercover drug cop, that is completely unnecessary and doesn’t really go anywhere.  It does marginally wrap back into the main plot toward the middle of the movie but it then continues it’s pointlessness until it fizzles out in the third act.

The plot is pretty slow moving and drags at times but there’s some interesting twists involving the killer keeping trophies in an abandoned car and the motives behind why he’s doing the killings and a reporter and police informant who get involved.  You also know that Aiden Gillen is the killer for the entire movie so you’re just waiting for Statham to figure it out and bring the pain and when he finally does, it’s extremely satisfying.  To break up the slow moving investigation, there’s a pretty good, Point Break style foot chase toward the middle of the movie, but that’s kind of it in terms of action.

If you’re a fan of Jason Statham then I would say Blitz is definitely worth a look as he’s his usual charismatic and bad ass self and he’s just fun to watch, even if the movie is a little slow at times and doesn’t contain constant action.  There’s some good supporting performances and if you want to see what a British take on Dirty Harry would be like, this is a good example.