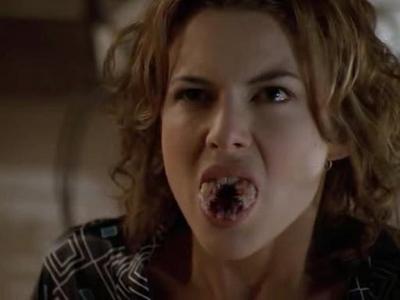 Sorry for the gap in between recaps but other things have been getting in the way but we’re back for an episode that rips off Species with a little Logan’s Run thrown in.

We find the gang still on the hunt for Rickman, although still no mention or sight of him this episode; just like our last installment.  The gang is trying to find their way through some sort of swamp, getting attacked by slime creatures (which actually seem like the Brain Slugs from Futurama) and Maggie gets one attached to her face.  Quinn manages to free her and the gang slides out but on the next world, Maggie collapses with some sort of green foam coming out of her mouth.  The others get her some medical help and discover that this world has made some incredible advances in medicine, including the ability to cryogenically freeze patients for transport to the hospital, effectively stopping further tissue damage.  There is also a mandatory organ donor program, which Quinn and Wade find out about soon enough.

At the hospital, the gang meets Dr. Sylvius, who reveals that while doing scans on Maggie, there was some sort of mass discovered in her stomach that is growing at an incredible rate.  While Dr. Sylvius explains this, Maggie becomes conscious and the first indication that something is wrong is that her eyes briefly turn insect like and she escapes through a vent to the hospital roof.  The trio of Quinn, Wade and Rembrandt find her throwing up up there and try to bring her back to the hospital but Quinn and Rembrandt get into a fight with guys who are revealed to be one of the units that tracks down organ donors, who have a wrist device that beeps when they are required to donate.  The “donor police” discover that Quinn and Wade don’t have the wrist devices and arrest them.  Rembrandt is sent off because he’s over 25 and he brings Maggie back to the gang’s hotel.

Rembrandt figures out where Quinn and Wade are but is stopped from going out by Maggie, who starts coming onto him like a drunken prom date.  Rembrandt shrugs off her advances but she keeps persisting until Rembrandt has to shove her off.  Maggie responds by revealing some sort of mouth tentacle and jumps out the window, clings to a nearby wall, and jumps down to the street.  Rembrandt reunites with Quinn and Wade, now registered as organ donors and they split up to find Maggie, following Dr. Sylvius’ assessment that she seems to be in some sort of breeding mode.

Maggie, meanwhile, buys or steals an extremely short dress and heads out to a bar to find a suitable breeding partner.  None of them seem to be up to her standards and one guy doesn’t take that very well, resulting in Maggie breaking his arm.  Maggie then trespasses into the pool area of a nearby apartment building and strips down and gets into the hot tub.  A curious security guard investigates and gets drowned for his efforts.  Wade figures that if Maggie likes hot water and steam and is looking for a man, the local health clubs are probably their best source to find her.

Wade turns out to be right and the trio finds Maggie at one of the spas but are too late to stop her from impregnating a guy in the steam room with her tentacle egg depositor.  Quinn gets a concussion from Maggie and she escapes yet again.  Wade and Dr. Sylvius try to extract the symbiote that hatches in the stomach of Maggie’s victim by lower the temperature of the body.  They are able to coax the creature out but kill the guy and the creature, shortly after, in the process.  Dr. Sylvius says that the creature in Maggie should be able to survive because it’s stronger but Wade is horrified that Sylvius would kill Maggie just to get this creature.  Sylvius wants the creature to study and replicate it’s growth ability to stop the organ donor program for both personal and financial reasons and activates Wade’s donor device when Wade threatens to tell Quinn and Rembrandt what she wants to do to Maggie.  Quinn makes a deal with Sylvius that they’ll capture Maggie in exchange for Wade getting deactivated and they find Maggie back at the hotel room.  Rembrandt manages to freeze her with one of the EMT spray guns and they bring her back to Sylvius’ lab.  They lower the temperature to just above the level that would kill Maggie and set a tropical aquarium on the other end of the room, hoping to lure the creature out and into the aquarium.  Sylvius grows impatient and wants to lower the temperature to killing levels but Quinn has the idea to offer himself to the creature to lure it out.  Quinn coaxes the creature out and tries to grab it and throw it in the aquarium but it gets loose and the gang only has a minute left to slide.  Dr. Sylvius tries to grab the creature but it forces itself down her throat and the Sliders are unable to help before they have to slide.  They leave Dr. Sylvius, taken over by the creature, targeting one of her male assistants.

This episode is completely a rip off of Species, which itself is already a cheesy B-movie and, in late season 3 of Sliders it’s doubly so.  The reason Kari Wuhrer was hired is made crystal clear in this episode as she’s constantly coming onto men, moaning and getting naked.  It stinks of FOX executives thinking they needed to “sex up” the show.  Fortunately for us, next week is the wonderful, but brief, return of John Rhys Davies as the original trio reminisces about a world that is very reminiscent of the future in HG Wells’ “The Time Machine”.