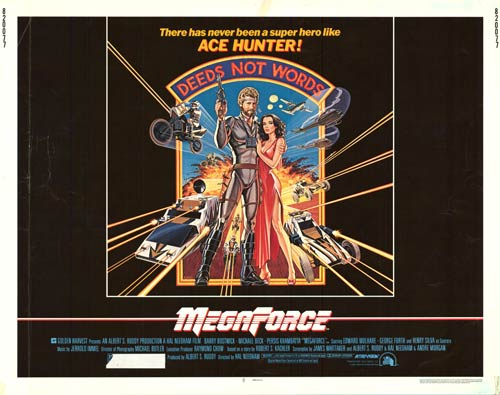 I talked about it on this week’s Everything Actioncast but I recently discovered the lost 80’s classic Megaforce on Youtube last weekend and it inspired me to resurrect our Top 5 lists (although future lists won’t necessarily be 5 items) and highlight some of the best things about this vehicular spectacular.

The trailer for Megaforce is an amazing mix of hyperbole and vagueness that makes it seem like it could be describing an action movie or some sort of monster truck/motorcycle rally that will be making it’s way to your local fairground. My favorite line is probably when the announcer declares Megaforce as “the ultimate spectacle”

4. Megaforce’s insertion and raid on the enemy base 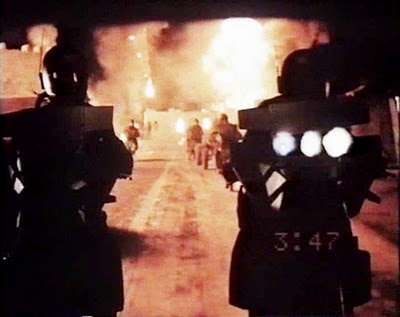 The main mission that the Megaforce has to take on in the movie is taking on a rogue general who is causing havoc on the border of two Middle Eastern nations. Megaforce leader, Ace Hunter, describes a complex plan that he says will require precise timing to drive the enemy back but in practice it devolves into dropping seemingly endless missile carrying motorcycles and dune buggies with lasers on them from a cargo plane and just blowing the absolute shit out of the enemy base. It’s actually pretty impressive the amount of explosions and vehicles that are driving around during this sequence.

Our first real glimpse of the technology and men of the Megaforce occurs when Commander Hunter and his squad of bikers arrives to show off their bikes firepower to a visiting British general by blowing up balloons while doing wheelies, with, of course, gratuitous slow motion. It definitely sets the tone for the ridiculousness to come and if you’re not on board, Megaforce probably isn’t a movie for you. 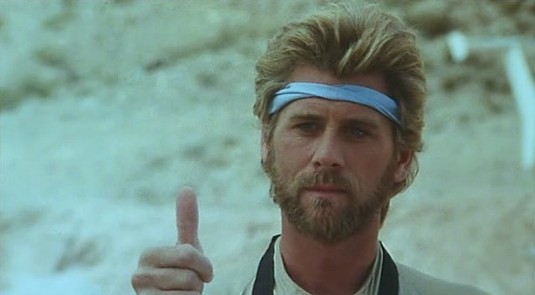 A hero who could only exist in the 80’s with his ever present baby blue bandana and skintight tan jumpsuits, Ace Hunter is the devil may care leader of the Megaforce. Ladies are unable to resist him, his men love him and there’s not a building or vehicle that he can’t explode, all aspects that would help him sucessfully lead to him becoming Mayor of New York City.

In the climactic final battle of Megaforce, the squad desperately has to reach their extraction plane while blasting their way through the enemy’s line of tanks. Hunter is knocked off his bike and is seemingly going to be left behind when he activates a recent upgrade to his motorcycle that turns it into a mini-jet. What follows is some of the most gloriously awful blue screen you will ever see and is the perfect capper to a movie that is closest the world will ever get to a live action version of the 80’s cartoon “M.A.S.K.”