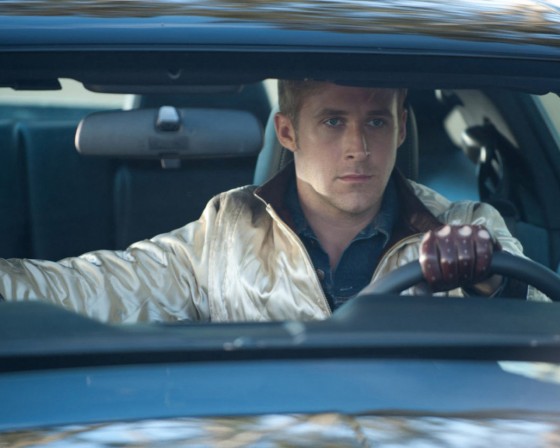 Appearing on many sites “Most Anticipated of the Fall” lists, Drive is the latest film from Scandinavian director Nicolas Winding Refn, who previously directed such bizarre, or so I’ve heard,  films as Bronson and Valhalla Rising.  Drive is Refn’s take on the Los Angeles crime movie that is the favorite genre of directors like Michael Mann and it takes a number of influences, filters them through a number of stylistic filters and delivers a great thriller with some fantastic performances.

Ryan Gosling stars as “The Driver” or sometimes “The Kid”, a Hollywood stuntman/garage worker by day and a wheelman/getaway driver by night.  He starts getting involved with his neighbor, a sweet single mother, Irene, played by Carey Mulligan, whose husband returns from prison in the hole to some gangsters.  The Kid decides to help him out with a robbery job to protect  Irene and her son Benicio but things go horribly wrong and The Kid must figure out how to return the money and get himself and Irene off the gangsters hit list.

Gosling is fantastic as Driver, playing him as the latest in a long line of mostly quiet, heroic protagonists.  He’s able to fluctuate between the being the consumate professional when dealing with his various clients to being sweet and shy around Irene and her son by just subtle changes in his facial expressions.  You eventually also get to see the underlying viciousness that Driver has inside him as he systematically starts interrogating and eliminating the various thugs on his way to the head crime honchos.  Speaking of those honchos, they are played Ron Perlman and Albert Brooks, who are vague crime partners who operate out of Perlman’s pizza shop.  Ron Perlman does his usual thing, which is always great, but Albert Brooks is amazing, making his character Bernie Ross seem like a reasonable, nice guy who will murder you if it seems like the logical thing to do.  I wish Brooks was in more of the movie, as he only shows up at the beginning and then in the last third because if he had been a factor through the whole film it would have made it that much stronger.  Bryan Cranston and Christina Hendricks round out the cast.

The trailers for Drive are slightly misleading as they seem to promise a little more car action and fighting than is actually in the film.  The opening features a fantastic car chase that highlights more of Driver’s evasion abilities than the typical “smash as many cars as possible and blow stuff up” approach.  The little things he does, like always have a police scanner on and using alleys and bridges for cover, really highlight how high level his driving skills are.  I wish there had been at least more sequence like this that showed off his precision driving skills.  There is another more traditional car chase that is brief but incredibly satisfying.  The movie also has only brief bouts of violence but when they occur, it is some of the most brutal violence I’ve seen in a movie in a while.  What happens to Christina Hendricks’ character in particular is one of the most gruesome things I’ve seen in a long time, but it’s also kind of awesome.  In contrast to the action sequences, there are long stretches, particularly after the opening chase, where it’s Driver hanging out with Irene and her son, which I understand are important for character development but it does start to drag a bit when you have yet another shot of Ryan Gosling looking longingly out a window.  The ending is also a little cliche and wraps up with, what I felt, wasn’t a very satisfying conclusion, especially after all the build up the movie does with the Driver/Irene relationship.

Michael Mann is definitely a major influence on the look of the movie as the Los Angeles skyline, usually at night, is the main source of transitions.  It also has a similar pace to his movies like Heat, or Collateral.  It also seems to borrow Tarantino’s idea of building tension in a scene that ultimately explodes in horrible violence.  To top all that off, it also borrows, musically and clothing wise, from the 80’s (Nicolas Winding Refn has said that the soundtrack was inspired by John Hughes movies) with electro-pop dominating the soundtrack and Gosling constantly wearing a white, satin scorpion jacket.

A lot of people are already calling Drive their favorite movie of the year.  I wouldn’t go that far but it was definitely a great movie and will easily be in my top 10 for the year, maybe my top 5.  The cast is fantastic, especially Gosling and Brooks and it has the feel of a great Michael Man crime thriller and a great sense for building tension that ends in horrible violence.  It slows down at times and the ending is a little unsatisfying but it’s definitely worth checking out in theaters.

Action Hero of the Week: Driver