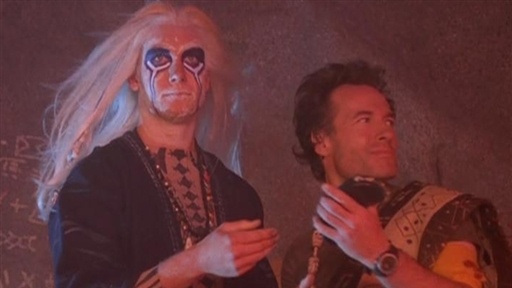 Taking a break from ripping off such beloved B-movies as Species and Tremors, Sliders this week pays homage to the Joesph Conrad classic “Heart of Darkness” as the gang finally catches back up with Col. Rickman.

The gang arrives on their latest Earth in the middle of a forest that is covered in yellow fog.  Maggie is able to breathe fine but the others are immediately coughing and unable to breathe.  Maggie leads the others out of the fog and Quinn reads from the timer that Rickman is still on world and they have a little over two days to find him.  Maggie goes back into the fog to scout but is unable to find anything so the group heads down a road that eventually leads to a run down looking town.

Quinn notices a clinic and figures they should check it out to get an idea of who might be potential victims for Rickman’s “spinal tapping”.  The gang catches the attention of a blind fortune teller, who warns Wade that Quinn is horrible danger and that if he enters the fog again, he will never come back out.  The rest of the gang is skeptical but Wade takes the seer, named Adra seriously and talks to her while the others check the clinic.  Maggie, Remy and Quinn discover that Rickman has already ransacked the clinic and ripped out the addresses of at least a dozen people.  Wade rejoins the group and tells them that Adra wants them to go take a look at girl named Lucy La Croix, who was attacked the previous night.

The gang heads up to the La Croix residence and Quinn confirms that it was Rickman since there’s a puncture wound on Lucy’s neck.  Rickman was rushed though and was unable to drain a full dose of brain fluid from Lucy.  Lucy’s father, Bunt, tells the Sliders he was able to get a shot off at Rickman and hit him, leaving a blood trail near the fog.  Maggie, Quinn, Remy and Bunt go to the where the blood is while Wade and Adra stay and try to help Lucy by performing some exercises that Wade remembers the people at the military base on Maggie’s world were doing to try and bring the victims of Rickman out of their comas.

The hunting party reaches the edge of the fog and Maggie goes in to investigate.  Even with her higher tolereance, she starts to cough and feel the effects of the fog.  Rickman takes this time to reveal himself (and explain away the fact that he doesn’t look like Roger Daltrey anymore because all the DNA he’s been stealing from people has effected his appearance) but leaves Maggie to pass out as he hears Quinn coming in with a borrowed gas mask. Back at the La Croix house, Lucy wakes up for a brief moment but passes out again and starts to develop a fever.  Remy grows increasingly frustrated with Adra and Bunt not wanting to help Lucy with actual medicine and storms off.  Wade finds him in the La Croix still checking out something called “Witch’s Brew” and refuses to talk about why he’s so against fortune tellers and superstition.  Wade leaves him in the still and on her way back to the house, is attacked by Rickman but he doesn’t spinal tap her, just roughs her up a bit.  Quinn and Maggie go in pursuit but Quinn quickly feels the effects of the fog.  Maggie makes a couple quick shots at Rickman but is forced to try and help Quinn back out.  Both of them are hit by blowgun darts wielded by some savage looking natives, who Rickman has apparently allied himself with and they bring Maggie and Quinn back to their village.

At the village, Rickman explains to Quinn that when he arrived, these natives captured him and brought them before their leader.  He was going to kill Rickman until Rickman explained about Quinn and the others chasing him.  Quinn is soon shocked to learn that the mysterious leader is his double, specifically the double who helped him solve the equation of sliding way back in the Pilot.  Alternate Quinn has gone insane from sliding by himself for years and is worshipped as a god by the natives.  He explains to Quinn that Quinn will have to either kill him or Maggie will die.

Back in town, Remy and Wade have gotten some of the “Witch’s Brew” from Bunt, which he explains lets people breathe in the fog after drinking it, and also get a map and a special magic pouch from Adra, who reveals that she used to be one of the natives in the fog, until she fell in love with a man from town and gave him the Witch’s Brew to be able to see her.  Her people killed him and blinded Adra.  Remy and Wade set out into the fog and Remy finally explains what’s been bugging him by telling Wade about a friend he met in Haiti while in the Navy that was told by a fortune teller he would die one day and seemingly set out to prove the fortune teller right to Remy.

Back in the natives village, Quinn is brought into a cave and finds that Alternate Quinn is repairing Rickman’s timer, whose microchip burned out upon entry to this Earth.  Rickman escapes and Alternate Quinn explains to Quinn that he was the one who is responsible for giving the Kromaggs the ability to slide by giving them the formula.  The Kromaggs destroyed his world anyway and Alternate Quinn wants Quinn to kill him so that he will have the will and strength to save his Earth.  Quinn gets into a fist fight with him instead and manages to knock him out and recover the timer.  Remy and Wade arrive at about this time and manage to distract the natives with Adra’s magic pouch, which projects an image of her in a smoke cloud when Wade lights it.  Remy unties Maggie, who has been dressed in an animal skin bikini and was about to become some sort of sacrifice and the gang slides out when Quinn appears and activates the gateway.

Overall this isn’t a bad episode of Sliders and it does have some nice callbacks back to earlier, far superior, episodes.  Jerry O’Connell does a fairly good job doing his version of Kurtz from Heart of Darkness (although the crappy white Kiss makeup is not very well done).  There’s some good character stuff too with Wade and Rembrandt but Maggie is still just on the show to scowl and show off her T&A.  Next week is a completely stupid episode where the gang gets caught up with snake poachers in “Slither”, see you there!