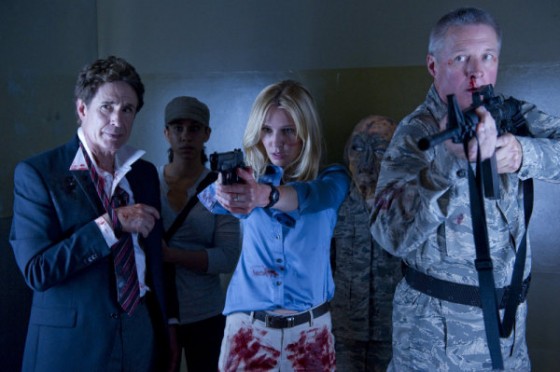 Releasing on DVD last week, Area 51 was the result of the recent partnership between After Dark Films and SyFy channel and was actually the movie that SyFy let fans vote on aspects of.  It’s probably the most competent SyFy original movie I’ve seen but that’s not saying much considering the channel has given us such past gems as Raptor Island, Ice Spiders, Yeti, Mega Croc vs Gatoroid and various other creature filled schlock fests.

Area 51 stars Bruce Boxleitner as Col. Martin, the head of Area 51 who, because of increased government and public pressure, agrees to lead a tour of the base for two members of the press, blogger Claire and TV newsman Sam Whitaker, and their assistants.  Unfortunately this tour is seen as the perfect opportunity by the various alien lifeforms locked away to escape.

I gotta give 51 the biggest praise for it’s use of practical alien effects and costumes.  The biggest thing that makes most SyFy movies hilariously terrible is the awful CG they employ for the various creatures.  51 actually features three vastly different aliens from the shape shifting “Patient Zero”, who is all skin and blood vessels over a humanoid form, Lady Death and her baby, who are demonic looking humanoids with razor sharp claws for arms/front legs and J-Rod, a friendly, telepathic alien who is a variation on the classic “Greys”.  I would say a hefty portion of the budget went to the costumes, especially Lady Death and J-Rod, since they actually look good and gives them more weight in the world, as opposed to being just pixels.

Acting wise, everything is pretty much what you expect from a SyFy movie in that you have one good but affordable actor and it trickles down until you clearly have members of the crew or actors from Craigslist as random alien fodder.   Bruce Boxleitner is awesome as usual but on the opposite end of the spectrum, Jason London and Rachel Miner are completely irritating as a pair of surface guards who I think are supposed to be comic relief until they are called upon to keep any aliens from escaping the base.

If there’s another thing that SyFy original movies are known for besides terrible acting and CG, it’s over the top gore but Area 51 is surprisingly restrained about it’s gore.  There are still dozens of random soldiers getting killed but it’s usually by Lady Death’s razor whip of a tail or Patient Zero stabbing them in the neck after fooling them in one of his disguises.

Area 51 also borrows elements from two classic alien movies, The Thing and Aliens.  From The Thing it steals the idea of an alien that can change shape and a test to determine who is an alien.  They do give Patient Zero the weakness of being able to only speak phrases he has heard his targets say and having to physically touch his targets to change into them.  From Aliens they borrow some elements of the Xenomorphs for Lady Death, like the aforementioned whip tail and also wrist mounted motion detectors with the familiar dots and semi circle.  The movie probably smartly keeps the Lady Death stuff separate from the Patient Zero stuff, so it’s probably not as messy of a plot as it could have been and it keeps you from getting bored like you might if there was just one alien to focus on the entire movie.

Overall, Area 51 is an OK alien/horror movie that actually has some good practical effects and costumes, wisely borrows from two of the best alien movies ever and has above average acting and plot for a SyFy original movie.  If it’s on SyFy one Saturday afternoon, you won’t be wasting too much of your time by checking it out or if you happen to see it at a Redbox or on Netflix.