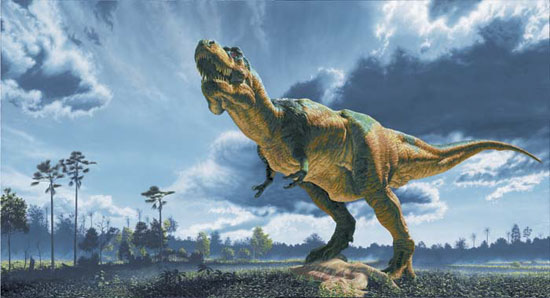 Counting this episode, there’s three more episodes left of our Sliders rewatch.  After last week’s horrible Anaconda tie in, this week the show is back on track (or as much on track as late season three sliders can be) as the gang tracks Rickman back to the colony world with the survivor of Rickman and Maggie’s Earth.

The gang first just misses Rickman after he attacks and kills a bunch of gypsies but they lock onto his trail and are surprised to find themselves back on the colony world.  They are also surprised to find the colony world is apparently home to dinosaurs, although Maggie moreso than the other Sliders because as Quinn literally says, “Been there, done that, got the t-shirt” (referring to the fact that the Sliders ran into dinosaurs already in “In Dino Veritas”).  Heading to the site of the settlers base camp, the gang finds it destroyed with evidence of a T-Rex around and, distressingly, a hillside of unmarked graves.  The gang presses on and comes across a soldier who fell into a pit trap after getting ambushed by Rickman.  The gang helps him out and he points out the direction of one of the scattered survivors camps, where Rembrandt is thrilled to find his buddy Malcolm living.  The gang also meets Gretchen, default camp doctor and who has been looking out for Malcolm.

Maggie and Quinn head out to track Rickman, promising to return to camp in the morning and later that night Gretchen explains to Wade and Remy over dinner by the campfire that the survivors inadvertently wiped out the native population with basic viruses like the flu.  The land was also pretty rich with game animals but the T-Rexes and other predators eventually wiped out most of the other animals.  There is one T-Rex in particular that is a constant threat to the camp and has resorted to eating it’s smaller cousins.   Maggie and Quinn get chased up a rocky hill by that particular T-Rex and spend a chilly night hiding from it.

In the morning, Remy and Malcolm go fishing and Malcolm tells Remy that he learned his hunting skills from a native boy named Bantu, who Malcolm taught to draw.  Malcolm and Remy are heading back to camp when they see a settler get picked off on the run by a T-Rex, to which Remy is shocked at how coldly Malcolm reacts; he says the man was stupid for being out in the open, alone.  Quinn and Maggie, meanwhile, catch up to Rickman but he leads them along to a cave and then causes a rockslide that closes the opening.  Quinn and Maggie attempt to dig themselves out but the T-Rex is trying to dig it’s way in to eat them.  Remy, Wade and Malcolm set out to find Quinn and Maggie when they don’t return to camp and arrive near the cave just in time to see Rickman slide out.  Rembrandt and Wade attempt to distract the T-Rex long enough for Quinn and Maggie to escape and Malcolm shows them a hiding hole in the ground where they are able to escape.  Back at camp, the gang still has a few hours before they can slide after Rickman and Quinn proposes that they should try to take out the T-Rex to protect the settlers.  Heading back to the original campsite, Quinn and the gang scrounge up the parts for Quinn to make a giant crossbow that will launch a compressed air tank into the T-Rex’s mouth, which Wade and Maggie will shoot, causing it to explode.  The crossbow fails hilariously, forcing Quinn and Rembrandt to heave the tank into the Rex’s mouth themselves.  Maggie and Wade manage to hit it and the Rex’s entire face explodes, ending that threat.

The other threat quickly returns however as Rickman is quickly back from wherever he slid to and takes Gretchen hostage, forcing Malcolm to bring the Sliders to him.  Rembrandt quickly realizes that something is wrong and convinces Malcolm to tell Rickman that the T-Rex killed them and, according to Maggie, Rickman will head to the cave in order to get proof.  Rickman does exactly that but notices that Maggie covered up all their tracks, including Malcolm’s, and blows the ambush.  Rickman takes Malcolm hostage and demands that Quinn hand over his timer, which Quinn relents to until Malcolm manages to throw sand in Rickman’s face and Quinn jumps on him.  After a brief struggle, Rickman activates his vortex and slides before Maggie can get a shot on him, forcing the Sliders to keep after him.

The dinosaur effects in Dinoslide are definitely improved from “In Dino Veritas” but they are still eye gougingly bad by today’s standard.  It’s not a terrible episode, especially compared to next week, and there’s a couple of nice character moments between Rembrandt and Malcolm.  Next week the gang faces off against vampires in “Stoker”.