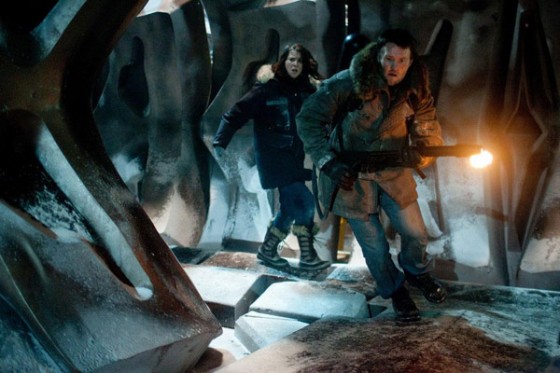 I think it’s fairly safe to say that the 1982 John Carpenter classic, The Thing, is one of our favorite movies here at Everything Action.  It has a great cast lead by Kurt Russell, a throbbing, tense score from composing master Ennio Morricone and some of the most amazing practical effects in movie history.  Take away most of those things and you have the new prequel, which has a few decent scares and effects but is a pale imitation of it’s predecessor.

The prequel takes place just days before the original Thing as the ill fated Norwegian science team in Antarctica makes the initial discovery of the mysterious alien being and it’s spacecraft.  Paleontologist Kate Lloyd (Mary Elizabeth Winstead) is called in to help with the removal of the creature from the ice but the crew of the science station quickly learn that the alien is not as dead as they thought it was and it starts to kill and assimilate the crew.

There are a couple major problems that plague The Thing 2011 and one of the biggest is the fact that it seems to be constantly rushing toward it’s inevitable ending (and the beginning of the original).  The original The Thing had a brooding, slow burn as the men slowly unraveled.  There are great scenes like Kurt Russell making a recording of what has happened for anyone who might stumble upon the station or the famous blood test scene.  These scenes brilliantly build the tension until it bursts when The Thing reveals itself in it’s latest horrific transformation.  The new Thing never stops to build up any of the characters or try to build tension.  The Thing in this prequel is like a rampaging beast rather than the stealthy killer of the 82 version.  It rampages around the base, absorbing the station crew without any rhyme or reason.  The original established that The Thing wanted to hide inside one of the crew and then make it’s way to civilization to spread itself further.  They make token remarks toward that fact but most of the movie is people getting into brief Mexican stand offs and then The Thing kills a bunch of the very expendable Norwegian science team.  Most of the scenes in the movie are also just the poor man’s version of scenes from the 1982 Thing such as the “test” to determine who is The Thing, the stand off that leads to someone who isn’t The Thing getting killed, etc.  Even when the movie does some original things, like exploring the inside of The Thing’s spacecraft, they don’t take the time to explore or give any insight.  There seems to be a lot of advanced technology on the ship but how The Thing uses it or why it even has it is never explored.

Obviously there’s also a glarring hole in this new Thing as there’s not a lead as charismatic and bad ass as Kurt Russell’s RJ MacReady.  Mary Elizabeth Winstead does her best Ripley from Aliens impression and is good as usual but she doesn’t have a lot to do other than burn things with a flamethrower.  The movie seems to want to setup Joel Edgerton as a Kurt Russell surrogate but he’s a cheap imitation and vanishes for the middle act of the film, so there’s not a lot of time to develop his character.  That’s the problem with most of the cast, they are all just expendable fodder for The Thing and you don’t learn anything about them outside of the most basic facts like “Lars can’t speak English and has a pet dog”.  The original took the time to give you sense of who everyone in the station was and you got a sense of their history together even if you didn’t see it.

As I mentioned in the intro to this review, the 1982 The Thing had, and still has, some of the most impressive practical effects ever seen in a film.  The inventiveness of The Thing’s various forms was only matched by their grotesqueness.  The new Thing suffers from heavy use of CG and the new variations on The Thing are uninspired messes of tentacles and teeth.  They actually seem to be inspired by the Necromorphs from the video game Dead Space in that they are more focused on extra appendages and weird shifting of the body.  There’s a couple of cool creature moments but nothing that’s going to be as memorable as the creatures of the 1982 version.

Overall, The Thing 2011 is a pretty unnecessary addition to the universe of the The Thing.  There is nothing compelling about seeing the expanded version of what happened at the Norwegian camp and no new revelations or information about The Thing that would make the movie worthwhile for fans of the 1982 film.  The brief glimpses and evidence from the destroyed Norwegian camp in The Thing ’82 allowed for you to imagine what horrors had happened there and this new movie will probably not live up to anyone’s imaginations.  It’s not offensively bad but it doesn’t justify it’s existence.  Stick with the original (especially the absolutely gorgeous Blu Ray version).

Horror Villain of the Week: The Thing