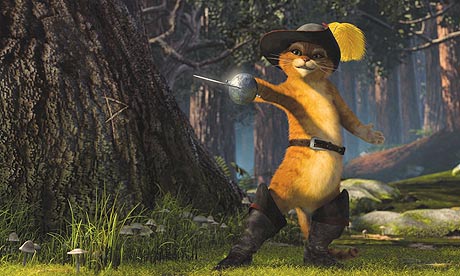 Despite it being Halloween weekend, Paranormal Activity 3 lost to Shrek spin off Puss in Boots.  Puss made $34 million to take the top spot, which is low compared to last year’s fall Dreamworks movie, Megamind and also on the low end of the Shrek franchise.  Paranormal 3 took a 65% drop from last weekend and made another $18.1 million, but since it only cost $5 million to make and has grossed $80+ million, future installments are pretty much guaranteed.  One of the other new releases, In Time, took the third place spot with an OK opening of $12 million while Footloose dropped down to fourth with another $5.5 million.  Surprisingly low for a Johnny Depp movie, The Rum Diary made just over $5 million and rounded out the top 5.  The guarantee of weirdness from the trailer might have scared people.   Real Steel finally fell out of the top 5, moving from second to sixth while The Three Musketeers begins it’s rapid fall off the top ten, going from fourth to seventh.  Nothing else had too drastic of a move.