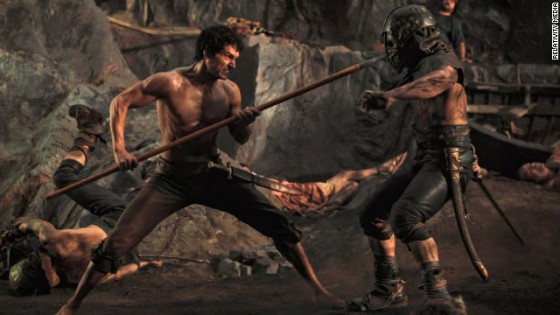 Surprising myself and probably most people who write about the weekend box office, Adam Sandler’s latest assault on comedy, Jack & Jill, was soundly defeated by Immortals.  Immortals, while not as strong a debut as similar titles like 300 and Clash of the Titans, was still the second strongest opening for an R rated 3D film and the best opening for smaller studio Relativity Media.  Jack & Jill came in second place with $25 million, the second lowest opening for Adam Sandler, only topping Funny People and just barely beating Puss in Boots in it’s third week.  Hopefully this means that America has come to it’s senses and realized that Sandler movies are the equivalent of sniffing glue, you’re just killing brain cells.    Puss in Boots took third with $24 million while Tower Heist moved down to fourth with $12.7 million.  Other newcomer, J. Edgar, took the fifth place spot with $11.2 million and was playing in less theaters than it’s competition.  Not much else to report on besides the fact that Paranormal 3 is quickly falling of the charts in the post Halloween weeks.  I don’t think anyone would bet against Twilight: Breaking Dawn destroying the box office this weekend and we’ll have to see how the rest of the movies weather the tween storm.