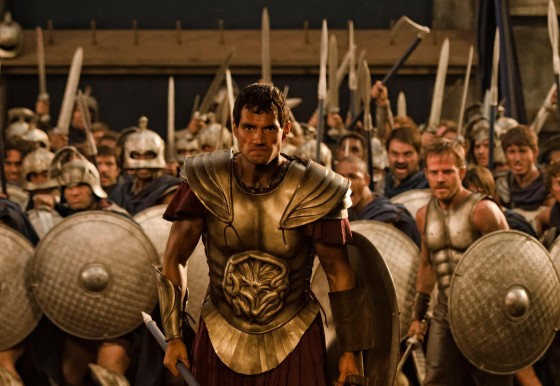 Billing itself as from “the producers of 300” and, from the trailers, seemingly sharing that movie’s stylish, slow motion heavy take on the sword and sandals genre is Immortals, the latest from Tarsem Singh of The Cell and The Fall fame.  While not quite at the level of 300, it still has some amazing visuals and spectacularly gory action, even if the plot meanders and bogs down at times.

Future Superman, Henry Cavill plays Theseus, a poor peasant from a cliffside village who, unbeknownst to him, has been guided by a disguised Zeus to combat the evil of King Hyperion, a warlord who wishes to use the fabled Epirus Bow to free the powerful Titans from their prison in Mt. Tartarus.  On his journey Theseus allies himself with the beautiful oracle Phaedra and wise cracking theif Stavros.  The plot is not the strongest aspect of the movie by any means, as the characters just sort of meander from place to place until they finally get the location for the final battle.

Although it’s not quite as insane as his previous movies, Immortals does feature plenty of stylish flourishes from Tarsem.  The costumes, especially for the gods, are all unique and, while maybe not practical, are interesting to look at.  Hyperion and his legions all wear some sinister, Leatherface looking masks and Hyperion also has a number of lieutenants who sport armor specific to their jobs like the hulking brute The Beast, who wears a helmet shaped like a bull made of barb wire or the falconer who has armor with metal, feather accents.  All the locations are gorgeous to look at as well from cliffs of Theseus’ village to the Mordor looking base camp Hyperion sets up at a captured monastery.  Where Tarsem’s directing really shines though is in the fight scenes, specifically the ones involving the gods.  These fights, which there are unfortunately only two of, almost one ups some of 300’s fight scenes by showing the power of the gods as they absolutely decimate their opponents and moving so fast that they are able to take out 3 or 4 enemies before they have time to react.  It’s done with this incredibly cool looking effect where the gods are in normal motion but the enemies are moving in slow motion.  The fights where it’s human vs human are solid as well, just not as incredible as the god fights.  There’s also the briefest of teases of a war in heaven, you’ve probably seen it in the trailers, that is like a mural come to life.

Henry Cavill does a solid job as the classical Greek hero, although he’s definitely more along the lines of a Harry Hamlin from the original Clash of the Titans than, to compare it to 300 again, the insane, rage fueled likes of Gerard Butler’s Leonidas.  He does a great job with some of the fight scenes but other scenes fall a little flat, particular when he’s giving the obligatory pre-battle speech.  Mickey Rourke chews scenery as King Hyperion and seems like he arrived on set every day after drinking a bottle of Jack Daniels.  The movie does a good job of getting you to hate him as he’s constantly performing horrible acts like murdering women, cooking people alive in a giant metal bull and randomly killing his henchmen.  He doesn’t really have any motivation for why he’s so evil though beyond the briefest of mentions that his family died sometime in the past and he blames the gods for it.  John Hurt is great as usual and is the standard “respected actor giving gravitas” character for the movie.  Frieda Pinto, much like Rise of the Planet of the Apes earlier this year, doesn’t have much to do besides look pretty and she has her first nude scene as well so that’s always a plus.  Stephen Dorff is an extremely weird choice to play the comic relief but he does a decent job.  As for the gods, none of them are much of a presence besides Luke Evans as Zeus, who is kind of bi-polar in that he’s supporting Theseus but also refuses to get involved with humanity.

One thing I found interesting about Immortals is that it presents the gods as perfect, kind, golden beings who just want to help humanity (everyone but Zeus that is) and the Titans are horrible, dirty, beasts who seem to live only to brutally murder everyone.  The portrayal of the mythology aspects reminded me a lot of the original Clash of the Titans and other mythology centered movies of that time, as opposed to say, a current take like God of War, where the Greek gods are complete and utter assholes who must be murdered in the most brutal way possible.

Immortals is definitely one of the better swords and sandals epics to come out in recent years but it can’t live up to movie it was promoting as it’s predecessor, 300.  Tarsem’s direction gives the movie a great look and some amazing fight sequences but the plot drags and the performances are decent, but not great.  If you’re a fan of the genre, it’s definitely worth a matinee ticket or rental when it comes on Blu Ray.

You can rent Immortals from Redbox here: http://www.redbox.com/movies/immortals