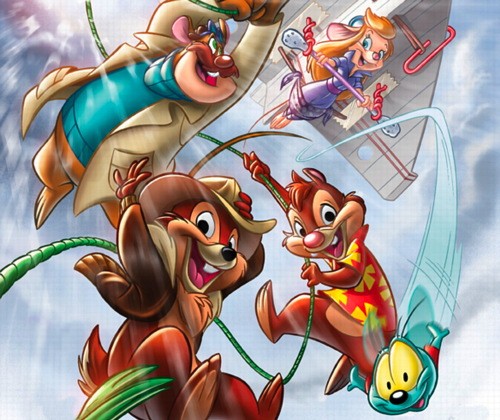 The arrival of the Teenage Mutant Ninja Turtles in the early 90’s spawned a bunch of imitators, some good, most bad.  Since the TMNT are clearly the best anthropomorphic animal team in existence, we thought we’d take a look at some of the other teams out there and see if there’s any that can stand up with the pizza loving OG’s.

The awesome B-side to the already awesome Eek! the Cat was the misadventures of the Terrible Thunderlizards and their attempts to eliminate the first two humans. The team consisted of Doc, an Arnold Schwarznegger parody and team leader, Kutter, a Triceratops and knife expert and Squat, the dull witted guinea pig, all three recently released from prison for their mission. Armed with the latest in prehistoric firepower like bee grenades, the trio attempted to eradicate cavemen Bill and Scooter, but were usually foiled by one of Scooter’s inventions inadvertently saving the day.

Though they, thankfully after the brain scarring pilot, never made it Saturday mornings, the Battletoads are still fondly remembered by most for their fantastic, but insanely hard, series of games, most notably the original NES game. The Battltoads, according to one origin story, were a trio of video game testers who suspected their boss might be up to something nefarious. The guys decided to investigate his office one night and found the game units were on. They checked them out and were transported to another planet and permanently transformed into their amphibian counterparts; Zitz: team leader, master tactician and technology whiz, Rash: wise cracking, attitude filled and super quick and Pimple: the muscle of the team. They fight against the evil Dark Queen and her henchmen with the help of Professor T. Bird using their physics defying ability to morph their limbs into weapons and whatever they can get their hands on. They even teamed up at one point with fellow NES beat em up specialists, the Double Dragons.

Star Fox is a team of animal mercenaries and crack pilots who are called upon to defend their home system of Lylat against the evil forces of gorilla emperor Andross. Fox McCloud leads the team with veteran pilot Peppy Hare, hot tempered Falco Lombardi and danger magnet Slippy Toad rounding it out. The group flies the super advanced fighter known as the Arwing, which also has variants that allow it to travel on the ground or underwater. The mission to defeat Andross is a personal one for Fox, as his father was killed by a bomb that Andross designed that exploded during a test flight.

Bucky O’Hare came right from the TMNT mold; it was based on a cult comic book, Playmates was working on the action figures and it got turned into a Saturday morning cartoon, video game, etc. However, kids just didn’t seem interested and the show only ran for 13 episodes. The show followed the forces SPACE or Sentient Protoplasm Against Colonial Encroachment as they battled the evil Toad Empire. The heroes of SPACE were the crew of the Rightous Indignation with Captain Bucky O’Hare at the helm, Jenny, a cat and the first mate, Deadeye Duck, the ship’s weapons expert, Blinky, the ship’s android and Willy DuWitt, a human sucked into the alternate dimension of the Aniverse from San Fransisco. The show has become a cult favorite and a fantastic entry in the space opera genre.

After years of tormenting Donald Duck, chipmunks Chip and Dale decided to become freelance investigators and founded the Rescue Rangers, who investigated anything from bizarre cults who worshipped soda to the various criminal schemes of crime kingpin Fat Cat. Chip became the leader of the team and fashioned himself after Indiana Jones while Dale donned a Hawaiian shirt, Magnum PI style, and took things a little less seriously, playing pranks and reading comic books. The duo recruited mechanical wiz Gadget Hackwrench, Australian adventurer Montrey Jack and fiercely loyal and surprisingly strong housefly Zipper to round out their team. Like most of the “Disney Afternoon” shows, Rescue Rangers got an awesome Capcom video game, action figures, comic books and also has one of the greatest theme songs of the 90’s.

The Street Sharks were probably the most blatant in their ripping off of the Ninja Turtles, changing pizza to hamburgers and hot dogs and “Cowabunga!” to “Jawesome!”. Evil scientist, Dr. Paradigm, is experimenting with combining sea creature DNA with human DNA and sucessfully creates a number of henchmen including the lobster creature Slobster, marlin creature slash and eel creature Repteel. Dr. Paradigm’s lab partner, Dr. Bolton, finds out what Paradigm is doing and tries to stop him but is horribly mutated by Paradigm. Paradigm then kidnaps Bolton’s four radical sons and transforms them using shark DNA, but they escape and embark on a quest to take down Paradigm. The Sharks consist of Ripster, the oldest and smartest brother who becomes a Great White, Jab, a lazy boxer who becomes a Hammerhead, Slammu, a strong as an ox football player who becomes a Whale Shark and Streex, the “extreme” brother who becomes a roller blading Tiger Shark.

What do kids in the 90’s love? Obviously being “extreme” and dinosaurs but when you combine them you get the extremely lazy Extreme Dinosaurs, that is basically a rip off of a rip off as it’s trying to be like Street Sharks. The Dinosaurs were rival groups of mutated dinosaurs with the “Extreme” variety being the good guys fighting the evil Raptors. Despite the name, there wasn’t much “extreme”ness happening on the show, none of the dinosaurs were “radical” or roller bladed or bungee jumped or any of the other “extreme” activities of the 90’s; they just got into super repetitious fights with the Raptors and had a crappy toy line.

Let’s say you’re Disney and you’ve made one of the most beloved series of kid’s sports movies ever with The Mighty Ducks, a series so popular they got an official NHL team named after them, what do you decide to do with an animated series based on said movies? How about a batshit insane mashup of aliens, parallel dimensions, hockey playing and the goodwill built up by the excellent Ducktales and Darkwing Duck? The story of The Mighty Ducks finds the hockey loving planet of Puckworld being overrun by the demonic hordes of Lord Dragaunus. A resistance group, led by Canard Thunderbeak, attempts to fight off the invasion but are forced to flee in their ship, the Aerowing, Lord Dragaunus chases them into interdimensional space and Canard sacrifices himself to free the Aerowing from Dragaunus’ tractor beam, giving a powerful goalie mask to young Wildwing Flashblade. The surviving ducks end up in Anaheim, CA and hide in plain sight as a seemingly gimmicky costumed hockey team while battling the forces of Dragaunus and trying to figure out a way home. The show assumed you were one of the 10 people in America who loves hockey, as all the Ducks weapons were puck or stick based and there were tons of hockey and ice related one liners.  The characters were your typical archetypes for 90’s superhero shows including the feisty, super competent female, zen strong guy, tech wiz nerd girl and “radical” younger guy. The voice cast was pretty good, including Tim Curry as Dragaunus, but it was just too ridiculous to take seriously, especially compared to previous Disney animated series.

5 Rules for the Deadpool Movie