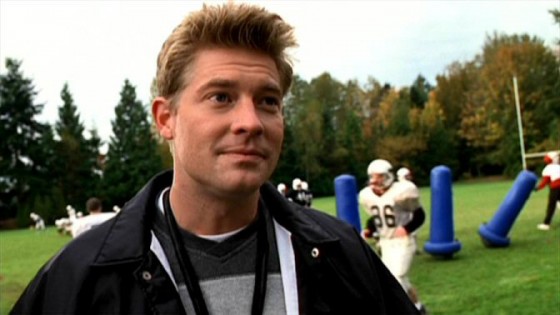 This week’s episode of The Lone Gunmen swings away from the dark tone of the pilot to the more wacky adventures of the rest of the show and the guys gain their fourth member in the eponymous Jimmy Bond.

The episode opens with the guys staging an elaborate kidnapping of a Japanese whaling executive in order to find out the names and locations of his fleet.  They make the executive think he’s back in Japan and Frohike engages in a wire fu martial arts fight.  The entire thing literally collapses but the guys are able to get the info they need but they unfortunately spend all their money on the scam and have none left to pay the printer’s to get their next issue out.

While the guys try to figure out how to get some more funds, with Langley suggesting they cover their front page bikini girls, they are surprised by Yves arriving at their door, who they hadn’t seen since Frohike stole the Octium IV computer chip from her.  Yves tells them that famous hacker/golf aficionado Alex Goldsmith was murdered in what the cops suspect was a drug deal gone wrong and suggests that things are not as they appear so they guys decide to investigate.

The Gunmen kick off their investigation by visiting Goldsmith’s mother’s house, who tearfully requests that the guys print what a good person Alex was and that he would never get involved with drugs.  The guys try to find something on Alex’s computer but it’s been reformatted but they do find a check for $1 million in Alex’s prized golf bag (which Langley accidentally vomits in since he’s feeling nauseous from having to siphon gas for the trio’s van) from a company called Philanthropic Outreach Enterprises or POE.  Going through their financial records, the guys find a single, seemingly bogus, account for a James Bond.  The guys find out James Bond’s license plate number and track him to what they think is a clandestine meeting but is actually a practice for a football team made up of blind players, who use sonar helmets and a sound emitting football, which Frohike mistakenly picks up and is violently sacked.  The guys find James Bond, who prefers to be called Jimmy, and realize that he’s not a criminal mastermind, just an enthusiastic, dim witted jock.  Thinking they’ve hit a dead end, the guys try to head back to base but their van’s gas tank is empty again so Frohike and Byers head back to bum some gas from Jimmy.  While their gone, Langley makes his way back to the POE offices and tries to bluff his way into getting Alex’s job when he’s discovered by the vaguely European bad guy, who we saw murder Alex earlier in the episode.  Langley is kidnapped and dragged to the bad guys heavily guarded mansion, which Frohike and Byers are informed about by Yves.

Trying to figure out a way in, the guys decide to recruit Jimmy, who is pissed off after finding out that POE is just a front for an arms deal the bad guys are planning.  Jimmy angrily charges into the bad guy’s driveway and tells them he knows everything and that they are going down, which earns him a driver to the back of the head.  Fortunately the guys accounted for this and Jimmy is to covertly (by punching through a door) able to slip Langley a ghost modem and get him back in contact with Frohike and Byers.  Yves tells the guys that the best play is for Langley to do what the bad guys want and Langley does just that.  Yves drains the bad guys account and runs off, presumably with a couple million in a secret bank account.  Jimmy and Langley manage to escape and Frohike bends open a couple of bars of the front gate and the guys get away.

The Gunmen close the case by giving Alex’s mom the $1 million check Alex received and try to head back to their base, only to have their van not start for the third time, forcing them to push it back.  When they arrive, they are surprised to find their last issue of the newsletter printed and at their door, courtesy of Jimmy, who wants to join because he respects the guy’s attempts to “fight for the little guy”.

This week’s episode is a drastic change in tone from the pilot, which must have been pretty jarring when the episode first aired.  There’s tons of slapstick comedy going on, especially playing off the blind football players and Frohike’s opening martial arts fight.  It also puts in place all the regular characters with the addition of Jimmy to the team.  Next week the guys attempt to out a possible Nazi war criminal as Frohike goes undercover as her son.

Total Recall: The Lone Gunmen “Like Water for Octane”