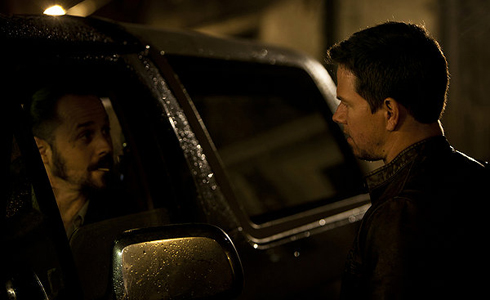 Contraband is a movie that is perfectly suited for a January release, because any other time it would be way out it’s league.  It’s a by the numbers heist movie that takes itself too seriously and ultimately just warrants a “meh” in response.

Mark Wahlberg stars as Chris Faraday, a master smuggler who retired to raise a family and start a legitimate business of installing home security systems.  His wife’s brother Andy (Caleb Jones), follows in Chris’ smuggling footsteps but blows a job for a vicious drug dealer (Giovanni Ribisi) and Chris is forced to reenter the smuggling world to bail Andy out and protect his family.

People either love or hate Mark Wahlberg and Contraband is not going to help change anybody’s opinion one way or the other.  He does is usual thing of being either confused or pissed off or both but he’s still one of the better current action stars.  Kate Beckinsale has basically nothing to do except get constantly threatened by Giovanni Ribisi and his goons.  Speaking of Ribisi, he is off in a completely different galaxy of acting, adopting what, I guess, is supposed to be a Cajun accent, as the movie is set in New Orleans but it’s so over the top it’s laughable and if the movie had a sense of humor, maybe they would have played it up more and it would have worked.  JK Simmons, as the captain of the ship Mark Wahlberg and crew are using to smuggle stuff, also seems to be adopting a Cajun accent but it’s almost too subtle, something you don’t normally associate with JK Simmons.  Ben Foster is seemingly going to be the comedic relief but then they establish that he’s a recovering alcoholic and he doesn’t even go on the heist with Wahlberg.

Contraband suffers doubly from being such a cliche of the heist genre.  On the one hand, you can basically predict the plot if you’ve seen any similar movies; something will go wrong that forces the crew to change the plan, one of the crew is a traitor, the crew narrowly avoids getting caught numerous times and the crew employs some sort of clever device to hide their ill gotten gain from the authorities.  It’s heist movie 101 although it is a little interesting to see what goes into smuggling things as opposed to just a straight up bank heist (although it’s apparently the easiest thing in the world to get onto the crew of a cargo ship with a conveniently assembled crew of fellow smugglers).  The one thing that Contraband should have taken from every other heist movie is the sense of fun with all the crazy members of the crew.  None of Mark Wahlberg’s crew stand out in anyway and they seem interchangeable as none of them seem to have any special skills.  In other heist movies you would have “the explosives guy”, “the driver”, “the muscle”, etc.

The other major problem with Contraband is that it’s just kind of boring.  There’s one action set piece in the middle of the movie but it seems to have been an afterthought when the director realized that they needed something so that they could sell it as an action movie.  All of the smuggling and heist stuff is all straight forward and not very interesting and there’s not even a final confrontation/fight that you would expect between Wahlberg and Ribisi.  There’s a kind of interesting dilemna that occurs between Kate Beckinsale and Ben Foster that, at first, seems like a ballsy decision but they quickly backpedal and the whole subplot fizzles out (Spoilers if you’re curious: Ben Foster thinks he murdered Kate Beckinsale by knocking into a bathroom sink but she survives, although unconscious, and Foster tries to hide her “body” at a construction site where they are pouring concrete).  The twists of how the guys pull of the heist are also pretty lame and they don’t even show how they did it.

If you’re a Mark Wahlberg fan, Contraband might be worth a rent but for everyone else, there are better heist movies out there, including Wahlberg’s own Italian Job.

Review: Bullet to the Head