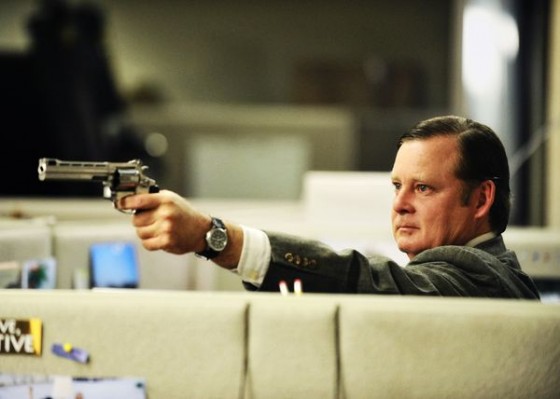 God Bless America is the latest, certain to be controversial, movie from Bobcat Goldthwait that indulges a lot of people’s secret desire to murder all the annoying assholes of pop culture, from the Kardashians to the Westboro Baptist Church to the horrible teens of My Super Sweet 16 and all the other MTV shit.  Joel Murray (Freddy Rumsen from Mad Men) stars as Frank, a man who is diagnosed with untreatable cancer and decides, since he’s going to die anyway, he might as well take down all the aforementioned horrible people with him.  He picks up a teenage girl as his sidekick and the two go on a rampage across America.  I appreciate the sentiment of the movie but it feels like an Uwe Boll movie, Postal in particular, and seems like it’s using shock as punchlines instead of actual jokes.  There’s probably going to be less horribly offensive 9/11 jokes in God Bless America.  The movie will be On Demand in April and in select theaters in May and you can check out the red band trailer below.