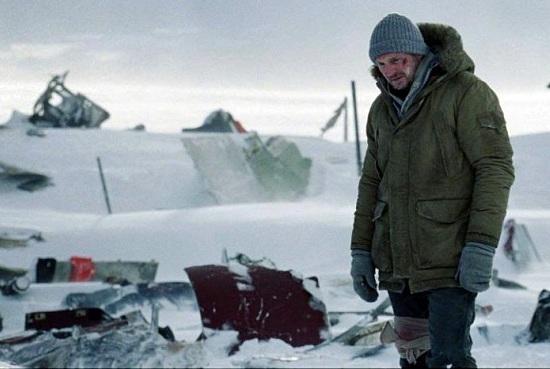 Liam Neeson continues to cement himself as an action star with his latest movie, The Grey, but there’s a lot more going on in it than you probably expect from the “Liam Neeson punches wolves” trailers.

Neeson stars as Ottway, a survival expert/hunter who works perimeter security for an oil drilling station in remote Alaska.  He’s suffered some sort of personal trauma and is basically on the verge of suicide as the movie opens but he quickly has to put everything aside when he and a small group of oil workers survive a horrific plane crash on their way back to civilization.  As if the freezing cold and remoteness of their crash weren’t bad enough, the men have seemingly crashed into the middle of wolf territory, as a pack of vicious wolves starts stalking and killing the men.

Neeson is at his absolute best in The Grey, giving both emotional depth and bad assness to the character of Ottway.  He effortlessly goes from staring down the wolf pack to comforting a man who is about to die.   No matter what situation comes up, Ottway keeps a level head and tries, and unfortunately usually fails, to drag the other men along with him to safety.  I also loved his resourcefulness whether he’s tying himself in to his airplane seat with three seatbelts to creating “wolf sticks” with some found shotgun shells and homemade spears.  If I was lost in the Alaskan wilderness, I would follow Ottway in a heartbeat.  The rest of the cast is a bunch of extremely solid character actors with the standout probably being Frank Grillo as Diaz, who starts out as what seems to be the typical asshole character but slowly grows and accepts his situation until he comes to his heartbreaking end. All of the characters are fleshed out extremely well and through things like fireside conversations, you start to care about them, which makes their eventual deaths to wolves, etc. that much more effecting.

Joe Carnahan does a great job of relating how dire the survivors situation is and how desolate a region they are in.  There are tons of shots of the wintry landscape that feel more and more hopeless as the movie goes on.  Not to say that the movie isn’t exciting as well, especially as there’s the almost constant threat of the wolf pack and there’s numerous times where you will probably jump out of your seat as a wolf comes out of nowhere to snatch away another survivor.  The plane crash is also one of the best I’ve seen.  Besides the wolves, the guys also have to fight the elements and just as many guys succumb to the freezing cold and nature as to wolves ripping their throats out.  The big scene that most people are probably waiting for, Liam Neeson taping bottles to his knuckles and taking on one of the wolves, is definitely not what you are expecting it to be and, *SPOILER* you don’t actually get to see Neeson go one on one with the wolf but the build up to that scene is so great emotionally that it would probably cheapen everything else, even though it would probably be awesome in the short run.

Just as I hoped, The Grey is the first great movie of the year, even though it’s not the balls to the action movie you might be expecting.  It is a fantastic survival movie with an amazing Liam Neeson in the lead and just goes to show the versatility of Joe Carnahan as the The Grey is a complete 18o from his last movie, the awesomely insane A-Team movie.  It’s definitely highly recommended and sets a high mark for the other movies of the year to match.

Review: Wrath of the Titans