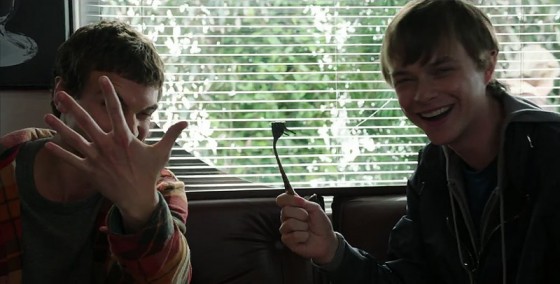 The found footage genre is expanding out of the horror genre this year with movies like Project X and this weekend’s Chronicle, which puts the super hero/super powers genre through the found footage genre.  The gimmick of found footage doesn’t really add much but Chronicle is still a surprisingly fantastic movie with an amazing climax, interesting characters and great effects.

Chronicle follows a trio of high school students; Steve, Matt and Andrew, as they find a mysterious cave in the woods while at a rave and gain mysterious powers from whatever is in the cave.  The guys start messing around and slowly grow more powerful, which starts to effect Andrew in dangerous ways.

The three main guys are all pretty great and manage to avoid becoming stereotypes, even though it would have been easy for them to revert into them.  Andrew is the shy, loner who has a sick mom and abusive dad, Matt is Andrew’s cousin and tries to act smarter and cooler than he actually is and Steve is the super popular jock/class president.  The discovery of their powers however knocks down all the social barriers that would have kept them in their respective circles and they become extremely close friends, which makes what happens later that much more affecting.  One of the things that makes the guys endearing is their genuine glee over gaining super powers, something I think we all would experience.  Their experimentation and progress results in some hilarious moments, like their Jackass style visit to a department store and their attempts to discover how invulnerable they are by hitting each other in the face with a baseball.  The movie also smartly handles typical high school problems like bullies and girls along with the problems caused by gaining super powers.  Andrew’s arc is the main thrust of the story as his powers seemingly give him more confidence and popularity but his new found confidence is shattered by an embarrassing moment at a party and the pressure of his mom’s sickness and his dad’s abuse causes him to start giving in to the darker aspects his powers allow him to do.

Speaking of the super powers, they are all done amazingly well, especially considering the budget of the movie.  The guys manage to gain invulnerability, flight and telekinesis, with the latter being the showcase for some of the most impressive effects.  The progression of the powers is also handled extremely well as the guys are able to move bigger and bigger objects, fly for longer period of times and become more impervious to damage.  One aspect that isn’t explored quite as well is the fact that the guys are seemingly psychically linked but it’s never really explained why and only serves as a way to get the characters to plot points. The invulnerability aspect of their powers is not really explored as far as the flight and telekinesis powers are.   All of the build up of the powers leads to the absolutely spectacular finale where *SPOILERS* Andrew fully unleashes his powers and goes on a rampage throughout downtown Seattle with Matt trying desperately to stop him.  It’s everything a super powered fight should be with cars getting thrown through the air, people smashing each other through buildings, and cops getting thrown around like rag dolls.  It puts the finales of some of the bigger superhero movies to shame.

The one thing I wish is that Chronicle wasn’t a found footage movie.  It doesn’t suffer from the crazed shaky cam of movies like Cloverfield but the gimmick doesn’t really add much and it takes you out of some scenes because you start asking yourself, “Why would he be filming this right now?” and there’s a little too much dialogue from characters asking and justifying the camera.  There’s also the completely unnecessary element of Matt’s girlfriend also filming everything for her “blog”, which is where some of the footage for the movie comes from.  If Chronicle had just been a traditional superhero movie, you would probably be that much more invested in the characters and the set pieces would be that much more spectacular.  That being said, the found footage gimmick does add to some of the scenes like when the guys are flying for the first time and a sequence during the finale where the camera is the car with Matt and his girlfriend as they are trapped by Andrew and taken to the top of the Space Needle.  There’s also a pretty clever gimmick where Andrew levitates the camera so that all three guys can be on the screen at the same time.

Chronicle is a surprisingly great super hero/super powered movie that features some incredible effects for it’s budget and full fledged characters that you actually care about.  It doesn’t really need to be found footage but the gimmick doesn’t detract that much from the quality of the film.  If you’re in need of a movie superhero fix, Chronicle is definitely worth checking out.