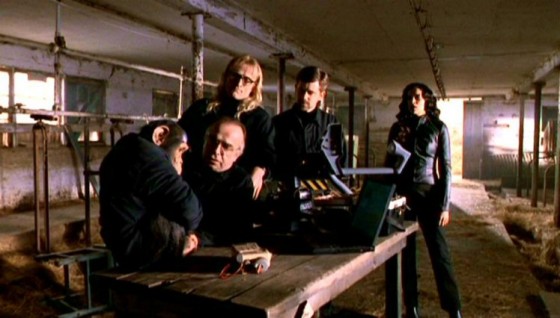 If you couldn’t tell based on the title of the episode, this edition of The Lone Gunmen features chimps, specifically one super intelligent chimp named Peanuts.

We first meet Peanuts at the Boulle Behavorial Lab where a Dr. Hasslip has been conducting experiments on chimps to try and make them intelligent.  Based on the old theorem, “A million monkeys typing on a million typewriters will eventually write Shakespeare”, Hasslip has the chimps listen to various works of Shakespeare (narrated by The Equalizer’s Edward Woodward) in the hopes one of them will recognize and start taking down the words on a computer.  Peanuts shocks Hasslip by perfectly writing down a section of Hamlet but when Hasslip brings in his colleagues, Peanuts’ screen is gibberish.  Hasslip walks out confused and Peanuts reveals that he actually is super smart by deleting his gibberish page and starts typing furiously away at the keyboard.

A short while later at a fancy hotel, the guys interrupt Yves in the middle of some sort of elaborate scam to lure a French man to her hotel room in order to tranquilize him.  Langley and Frohike accuse Yves of trying to mess with their minds with an e-mail but Yves claims to know nothing about it and beats a hasty escape to the hotel roof as she claims there are three men coming up the elevator to kill anyone still in the room.  Langley and Frohike quickly make a makeshift escape rope out of the room’s sheets and towels but hide on the patio umbrella, fooling the assassins.  Furious with the Gunmen, Yves heads back to the HQ with Langley and Frohike and demands that they explain just what the hell is going on.  Byers explains they recieved an e-mail with an attached audio file that claims to be from someone being held captive at the Boulle Reserach Laboratory and that he’s being experimented on and subjected to humiliating tests.  The mysterious e-mailer asks the guys to meet him at 1 pm the next day with a pair of bolt cutters to rescue him from the lab.  Yves correctly identifies the voice as Woodward and the guys are ready to call it a joke but Byers convinces everyone to check it out as the e-mail did originate from the lab.

The guys make it to the lab at the appointed time and are confused that a group of chimps are being let outside.  Jimmy quickly comes to the conclusion that one of the chimps sent the e-mail, which the rest of the guys scoff at but Yves is seemingly in agreement with.  Jimmy goes to rescue the chimp who is sitting by the fence but the chimp knocks Jimmy down upon escaping and knocks him out on a rock.  The guards at the lab capture Jimmy and give chase to the Gunmen, but they manage to get back to the van and escape.  Yves finds out that they have a stowaway in Peanuts.  The gang takes shelter in a nearby abandoned barn and try to find out if Peanuts is smart or not but he plays dumb until Yves catches him trying to steal the guys’ van.  Letting Peanuts use Langley’s computer, Peanuts downloads a voice synthesizer and explains that he’s given himself the name Simon and that he’s been genetically altered to have super intelligence.  Yves tells the guys that she’s heard rumors about what’s been going on at Boulle and that the government is starting with chimps but eventually wants all kinds of intelligent animals to act as spies and even assassins.  The guys want to publish Simon’s story but he refuses. He does reveal that he knows about an animal assassin who is already out in the wild, a former Russian agent named Bobo who has been hired to kill the French trade minister the next day in Washington.  Byers, Frohike and Yves hurry to the most likely place for the hit, the National Zoo, while Langley stays behind with Simon.  Simon quickly overpowers Langley and ties him in a tire swing Langley was going to make to keep Simon busy and gets himself shipped express to the National Zoo and also alerts the authorities to where Langley is.

At the zoo the next day, Byers keeps an eye on the French trade minister while Yves and Frohike attempt to get into Bobo’s cage and tranquilize him.  Frohike is ambushed by Bobo, who is hiding near the ceiling of the cage and knocked unconscious down the slide to the outside enclosure.  Yves manages to tranq Bobo and loads him and Frohike into a laundry cart and wheels them out.  Byers, still outside, sees the other monkey of the exhibit, Lady Bonkers, holding a banana in a threatening way and, since she also came from the Boulle lab, Byers thinks Bonkers might be the actual assassin and mistakenly tackles the trade minister, earning him a beatdown and arrest.

Back at the Gunmen HQ, Frohike wakes up to find Bobo honking his nose and springs up to attack but Yves quickly explains that Bobo is dumber than a box of rocks and that now Jimmy, Langley and Byers are in custody.  Yves proposes that they make an exchange and try to fake Bobo as Peanuts but at the exchange, Dr. Hasslip realizes that they dyed Bobo’s forehead white to try and match Peanuts.  With the entire group being arrested, Jimmy breaks and tells Dr. Hasslip that Byers figured out that Peanuts changed places with Bobo at the Zoo and they all head back there and make the switch.  The guys are furious that Jimmy seemingly sold out Simon but Jimmy takes Langley’s laptop and reveals that the guys actually had Simon the entire time, he shipped himself to the Zoo and took Bobo’s place when Yves, Frohike and Byers arrived.  Now that Dr. Hasslip thinks he has Simon back, Simon can stay at the zoo with his love, Lady Bonkers, completely safe from now on.

Next time, Byers has to head undercover as a prisoner at a maximum security prison.