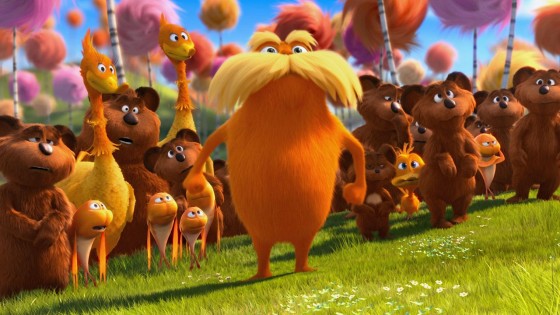 Easily winning not only the box office, but the year so far, The Lorax took in a ridiculous $70.2 million over the weekend.  It’s also the eighth best animated debut and the best Dr. Seuss movie debut and also beat Illumination Entertainment’s previous movie’s, Despicable Me, opening weekend.  In a far distant second place was Project X with $21 million, which is still solid for a party movie and all of this year’s found footage movies have debuted over $20 million, so expect the genre to keep getting bigger.  Act of Valor dropped down to number 3 with another $13.5 million and bringing it’s total to just over $45 million.  Safe House crossed over the $100 million mark over the weekend and remained steadfast at fourth place and Good Deeds rounded out the top 5 with $7 million.  There was a slight battle for tenth place between Wanderlust and The Artist, with Wanderlust eventually taking the spot with $3.8 million.  The big question for this coming weekend is how John Carter will do.  Disney has sunk almost half a billion dollars (or more depending on the source) into the movie and I don’t know a single person who is psyched to see it.  It could be a historic bomb but we’ll have to wait till next week to know for sure.