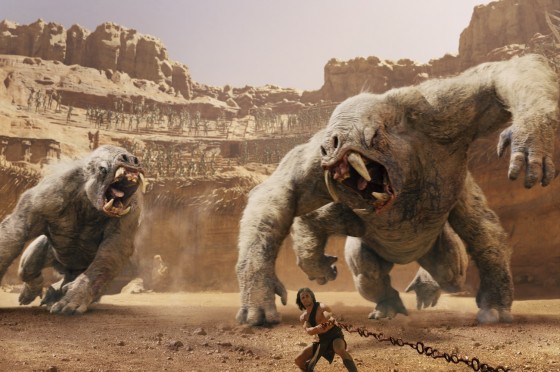 Disney is trying to find another live action franchise on the level of Pirates of the Caribbean and they thought that the 100 year old pulp sci-fi classic John Carter series would be that new franchise.  The box office proved otherwise but the actual movie isn’t bad, it’s just not quite up to the daunting task of converting the dense mythology and world to the big screen.

Based on the Edgar Rice Burroughs novel “A Princess of Mars”, Taylor Kitsch (of Friday Night Lights) stars as Confederate veteran John Carter, who is transported to Mars (or Barsoom) after an incident in a cave of gold in Arizona.  Carter finds that the difference in gravity gives him superhuman strength and jumping abilities and he becomes embroiled in the civil war between the human like Red Martian factions.  There’s also the towering, multi armed Tharks and mysterious and manipulative Thern to deal with.

Easily the best part of John Carter is the special effects.  You can see pretty much every cent of it’s ridiculous budget on the screen in the insect like flying battleships of the warring Martian tribes, the city of Zodanga that travels across Barsoom and the various creatures.  The Tharks in particular are extremely well done, utilizing the facial and motion capture that has become the norm for these big budget movies, and their animation and facial expressions are amazing.  The special effects help contribute to some epic action sequences, including ship to ship battles and the arena battle you’ve seen bits of in the trailer where John Carter is forced to face off with giant, blind “white apes”.  Everything has a very unique look that is fun and interesting to look at, if nothing else.

One of the things that drags down John Carter quite a bit however is the weird mix of trying to cram way too many plot points into the movie but not actually having a strong through plot.  The movie just sort of meanders from place to place with no sense of stakes or purpose.  The plot should be about stopping the evil Sab Than from using his powerful weapon, the Ninth Ray, to take over Mars but no one is in that much of a hurry and John Carter only gets seriously involved when his love interest, Deja Thoris, is forced to marry Than to stop the civil war.  There are four factions on Barsoom, all with different motivations, politics and culture and the movie spends most of it’s time that isn’t action with scenes of characters explaining various backstory and mythology to each other or John Carter.  Even then, there’s so much that is just left dangling that I’m sure you understand if you’ve read the books but that’s practically no one so you’re just left to infer and guess about what all this weird alien stuff is.  For example, the shape shifting, seemingly immortal Thern (led by Mark Strong) are manipulating events on Barsoom but there’s no real explanation about what their ultimate plan is, why they have been seemingly coming to Earth and their plot just sort of sizzles out toward the end of the movie.

Acting wise, Taylor Kitsch is a decent action hero, showing off some decent sword fighting chops but most of his big action moments are CG.  Dominic West and Mark Strong are good as the main pair of villains with Strong being wonderfully dickish and West snarling like an evil Roman general.  Willem Defoe gives the main Thark, Tars Tarkas, a lot of personality and emotion but he’s in the movie for a surprisingly short time, disappearing for a good half before coming back to help John with the final battle.  Lynn Collins is a pretty great heroine, easily holding her own or besting John Carter in the action department and also, since she’s a scientist, extremely intelligent and confident.

Disney probably doesn’t have the new franchise they were looking for but they do have a decently fun adventure movie that probably could have benefited from a tighter script and a better marketing campaign.  There’s some fun action and humor, decent acting, but the relentless alien politics and mythology bogs the movie down so that the 2 hours and 30 minutes of the movie sometimes feels even longer.