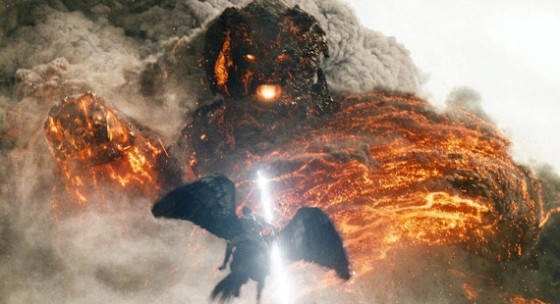 A movie that came out before we started doing regular reviews was Clash of the Titans, the remake of the 80’s stop motion classic.  I would probably have given that new Clash a 2 out of 5 just because the ending was so anti-climactic, there were massive plot holes and the only redeeming things were a couple of decent action scenes and Liam Neeson and his amazing reading of “Release the Krakken!”.  This past weekend saw the release of a sequel that probably no one was excited for with Wrath of the Titans.  Does it improve on it’s predecessor or is it somehow even worse?

Wrath picks up about 10 years after the events of Clash with Perseus (Sam Worthington) trying to live a peaceful life with his son Helios in a small fishing village but is called upon by Zeus (Liam Neeson) to help him keep the walls of Tartarus from collapsing and releasing the imprisoned Titans, most notably Cronos.  Perseus at first refuses but is forced into embarking on an expedition to the Underworld when Zeus is betrayed by Ares (Edgar Ramirez) and Hades (Ralph Fiennes).  Warrior queen Andromeda (Rosamund Pike) and son of Poisedeon, Agenor (Toby Kebbell), join Perseus on his quest.

First and foremost, Wrath immediately improves on Clash by having an actual climax and it’s actually pretty impressive.  *Spoilers* Cronos is released and explodes out of a mountain and Perseus must fly Pegasus straight at him with a powerful weapon while Zeus, Hades and Andromeda’s troops try to distract him and his crazy double bodied warriors.  Unlike Clash where they built up the Krakken and had him almost immediately killed upon rising out of the water, Kronos is built up and actually delivers on the destruction.  Kronos also looks amazing as well and you can tell that a lion’s share of the budget went to rendering all the rivers of magma coming off of him and all the little details.  It’s not on the level of Kratos vs Cronos from God of War III but again, it’s a massive improvement over Clash’s non-ending.  The other mythological creatures Perseus and the crew go against look pretty good as well and features the likes of chimera, cyclops and the Minotaur.  I don’t know if they are technically Titans but it’s probably too much to ask that the movie just throw a bunch of crazy Titans at the audience who are probably still trying to get a handle on the Gods, and the extremely fluid rules regarding their powers and what they can and can’t do.

As good as the final action sequence is, the rest of the movie is weirdly lacking in action for a supposed blockbuster action movie.  There’s a couple of smaller fights where Perseus takes on a Chimera and the Minotaur but they are really short, especially the Minotaur battle which is over in what feels like just over a minute.  The rest of the movie is Perseus and co. traipsing around Greece going to interesting looking temples and the Labryinth but mostly talking to people and gathering information and Zeus slowly getting his power drained by Hades and Ares.  That final sequence is seemingly geared to make up for the lack of action but it definitely could have used a couple more fights with creatures or, at the very least, making the fights it did have longer.  I did appreciate the fact that Hades and Zeus actually get to get their hands dirty this time instead of just hanging out in Olympus.

It’s still mind boggling that these movies are able to get talent like Liam Neeson, Ralph Fiennes and Danny Huston to slum it in a B level God of War rip off but they are back for this one.  Neeson is amazing as always but unfortunately doesn’t have any memorable moments like his Krakken line from the first and spends most of the movie chained up and getting his hair slowly turned white.  Ralph Fiennes gets to flesh out Hades a little bit more than in Clash, where he was just a completely cartoonish villain. Speaking of cartoonish villains, Ares has basically no defining characteristics other than being a dick and is not very interesting character.  A breath of fresh air about halfway through the movie is Bill Nighy as cast out god Hephaestus, who forged the weapons of the gods and also designed the Labryinth.  He plays him with hilarious energy, constantly talking to himself and arguing with robotic owl Bubo (in a nod to the original Clash).  Whatever you’re opinion of Sam Worthington, it’s likely not going to change with Wrath.  I personally think he’s a decent action star but he could really benefit from getting a character with a sense of humor, since he’s always so dour and serious in pretty much every movie he’s been in.  Rosamund Pike is a more active replacement for Gemma Arterton and continues this year’s trend of strong, ass kicking women on the big screen.

Wrath of the Titans is a definite improvement over Clash of the Titans but it’s still not at the level of it’s contempories like God of War, 300 and even last year’s Immortals.  It has a good final sequence, a great supporting cast but it doesn’t have enough action and spectacle to be the blockbuster it thinks it is.  If you really liked the first one or if you’re a huge Greek mythology nerd, it might be worth checking out at a matinee but everyone else can probably wait till it comes out on DVD and Blu Ray.

Wrath of the Titans Trailer