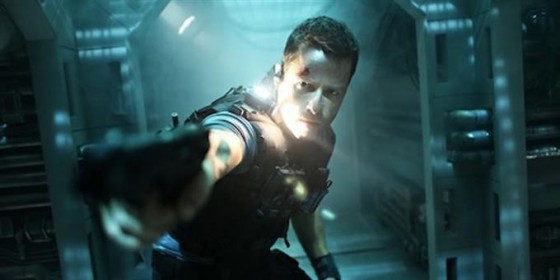 Unfortunately landing with a thud at the box office over the last couple of weeks, Lockout is the last from the Luc Besson action movie factory this is Europa Pictures.  I’m not exactly sure why people didn’t come out because it’s an extremely solid, extremely fun action romp in space, even though it fall into a number of action cliches.

Guy Pearce plays Snow, an ex-CIA agent in the near future, who is recruited for an extremely dangerous rescue mission to the orbiting space prison MS-1.  The inmates of the facility have taken over and the President’s daughter, Emilie (Maggie Grace), is one of the hostages.

Pearce is an absolute blast as Snow, who would most definitely be played by Kurt Russell if this was an 80’s John Carpenter movie.  He has a witty response to pretty much everything any character says and is also able to throw down when it’s necessary.  There’s a couple of moments where it’s supposed to be dramatic that feel a little flat but for the most part, it’s just hilarious one liners and last minute saves.  Lockout features two awesome character actors as well with Peter Stormare and Lennie James as the sort of good cop/bad cop in charge of Snow’s rescue mission.  Lennie James could be in pretty much anything and lend it class and gravitas and he does exactly that in Lockout but he seems to be having a little more fun than he usually does.  Maggie Grace is about the same as she always in in her weird niche of being the kidnapped girl but she’s not utterly helpless like she was in her last Europa outing, Taken, and she and Pearce have some good back and forth insult moments.  The bad guys, played by Vincent Regan and Joseph Gilgun, are decent but fall into the cliche “evil brothers” setup where one is calm and collected and the other is psychotic and unpredictable.  It’s also hard not to wish Gerard Butler was the bad guy, as Vincent Regan is basically the poor man’s Butler.

In terms of action and plot, Lockout moves along at a great clip as Snow and Emilie try to work their way through the space prison and dodge the inmates.  There’s some fantastic sequences including one when Snow first arrives on MS1 and has to cross a gap using gravity wells to float across but ends up in a zero g fight with one of the inmates.  If that’s not bad enough, when he finally makes to the first daughter, he has to perform some emergency medical procedures, including sticking her in the eye with a syringe to re-stimulate her brain tissue. Speaking of which, the one thing I would have definitely changed about Lockout is to go for an R rating, which I was under the impression the movie was until seeing it.  The addition of over the top, hilarious violence would have added that little extra fun factor to the movie and there’s a couple of scenes where it’s jarringly bloodless.  The threat of space also adds some fun dynamics to what would otherwise be some pretty standard action sequences.  The CG is a little dodgy at times as well, they wisely spent most of their effort on rendering the MS1 station’s exterior but other scenes suffer, like an early sequence where Snow is evading authorities on a hoverbike that might draw comparisons to the end of Torque for how unrealistic it looks.

Lockout borrows a lot from other action movies, probably most notably Escape from New York, Con Air and maybe The Rock.  Also, if you’re well versed in action movies, you will easily see most of the plot points coming from who double crosses who, what’s going to go wrong when, etc.  It’s still a pretty fun ride but don’t go in expecting originality.  There’s also a sideplot involving the job Snow was on before getting arrested that probably got focused on more than it should have, as the movie is constantly going back to it and the payoff isn’t really worth the time invested, at least in my opinion.

Bottom line, Lockout is a fun and solid sci-fi action movie with a great action hero performance from Guy Pearce and a setting that makes the cliches of it’s plot feel slightly more unique.  It’s probably not going to be theaters for much longer but I would say it’s definitely worth checking out when it comes out on DVD and Blu Ray.