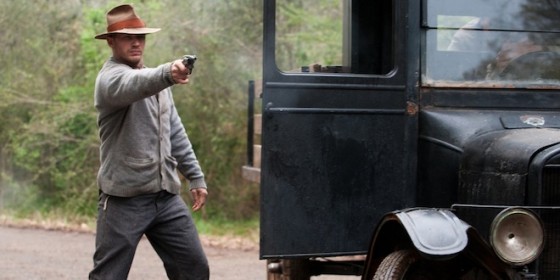 The Prohibition/Depression era of the 1930’s has been the inspiration for a number of movies over the years from The Untouchables to, most recently, Public Enemies and later this year there’s Lawless, starring Tom Hardy, Shia Labeouf, Jason Clarke, Jessica Chastain, Mia Wasikowska, Gary Oldman and Guy Pearce.  Hardy, Labeouf and Clarke play the real life bootleggers, the Bondurant brothers of Virginia, whose attempts to build their own little criminal empire are threatened by a federal agent, played with Val Kilmer in Tombstone level crazyness by Pearce, and rival gangs.  It’s directed by John Hillcoat, who most recently directed The Road and is out in August.  Check out the trailer below.