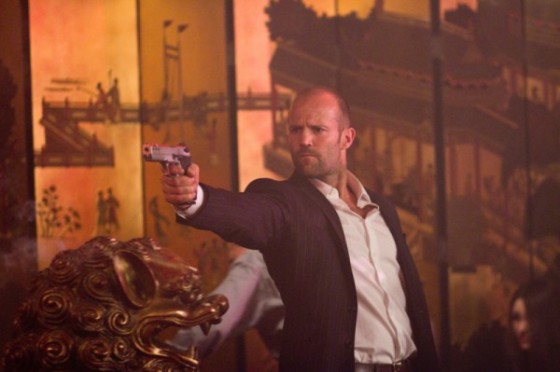 The first offering from Jason Statham this year is Safe, which is a solid action movie which gets dragged down by a highly convoluted plot and a basically non existent relationship between Statham and his young protectee.

Statham plays Luke Wright, a former cage fighter who angers the Russian mob after blowing a fixed fight .  The mob kills his wife and tells him they will kill anyone else he even talks to, causing Wright to become a homeless bum.  Finally fed up with everything after a year of living on the street, Wright goes to a subway station to end it all when he sees 12 year old Mei in danger from a group of Russian thugs and intervenes.  He learns Mei has memorized a sequence of numbers that are the combination to a safe that apparently every criminal organization in the city wants.

The plot is so convoluted that it’s incredibly difficult to keep track of who wants what and why.  The original deal is between the Chinese Triads and the Mayor but then the Russians and a group of corrupt cops get wind of it and try to get in on the deal as well.  Equally as ridiculous is the fact that Statham keeps getting backstories where he’s not just a cage fighter but a former cop and then he’s not just a cop but a former special forces soldier called in by the mayor to help “dispatch” the criminals who were taking advantage of the chaos following 9/11.  It explains why Statham is able to clear entire rooms of bad guys by himself but they probably could have just picked one backstory and expanded on it.  Also bizarre about the plot is the fact that the central selling point of the movie, Statham protecting this girl, is not even a significant plot point.  The two are together for maybe 20 minutes before Mei is taken again and they develop nothing resembling a relationship and that means there’s no justification for why Statham is putting his life on the line for the rest of the movie.  It feels like they were trying to do a Man on Fire sort of story where Statham’s character learns to live life again but you actually have the characters interact for any sort of transformation to happen.

Fortunately, action wise, Safe is extremely solid with Statham laying waste to dozens of goons in a couple of really fantastic shootouts and fight sequences.  The shootouts are especially well done and I like the fact that they drop the music and just have the sound of the guns firing, a la Heat, to give it that extra intensity.  There’s also a really great car chase sequence that has some interesting visual tricks.  It’s about on par with something like The Transporter and has a similar flow to the action of that movie.  The lack of Statham having to drag Mei around also helps the action by allowing Statham’s character to go all out in the fights and gun battles because he doesn’t have to worry about a 12 year old Chinese girl getting killed, so that’s a positive.

As far as acting goes, do you like Jason Statham? If the answer is yes then you will enjoy him in Safe because he’s not doing anything different besides being a cocky bad ass.  He does try to throw a little more emotional depth in but it’s mainly just typical Stathaming.  Catherine Chan, who plays Mei, is probably one of the worst child actors I’ve seen in recent years.  I don’t know if English is her second language or what but every line she had felt extremely stiff and flat and it felt like she was reading off of cue cards.  That doesn’t help build the supposed relationship between Statham and Mei.  Speaking of that relationship, Reggie Lee, who plays Mei’s adopted “father” has a more fleshed out relationship with Mei, even though he’s one of the Triad bad guys.  James Hong shows up and is pretty fun as Triad crime boss Uncle Han and Anson Mount, of Hell on Wheels, seems like he could have been an interesting character as Statham’s former special forces partner who was also recruited by the mayor (and who might have some sort of “special” relationship with the mayor as well) but they don’t introduce him until the last 20 minutes and then attempt to rush the build up of his character as a bad ass equal to Statham’s character that ultimately doesn’t lead to anything besides an Equilibrium style fake out fight (which is getting a little cliche).  If his character had been a factor throughout the whole movie, it might have worked a little better but the movie definitely didn’t need a fourth bad guy factor in the mix.

Overall, Safe has some extremely solid action that suffers from a convoluted plot and characters and doesn’t even follow through on the premise it described in it’s advertising of Statham protecting this girl from danger.  Statham is as awesome as ever and if you’re a fan like we are, it might be worth checking out in theaters but you wouldn’t miss much by waiting for it to come to DVD and Blu Ray and it’s definitely in sort of the middle in terms of Statham movies, probably somewhere below The Mechanic but above something like Killer Elite.