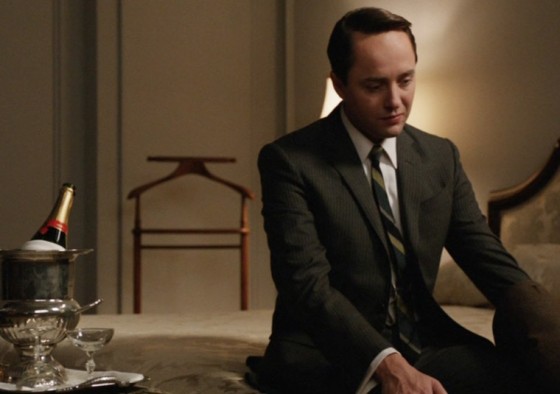 Secrets have long been a theme on “Mad Men” starting with first and biggest one: Don’s true identity. When the proverbial cat was let out of the bag a few seasons ago, fans wondered where the series was going to go now. Last season, we thought they knew who Don Draper was, but Don himself had to do some soul-searching. This season seems to be centered around the true “Mr. and Mrs. Draper” and Don believing he has found his soul-mate. (The episode’s Cool Whip re-enactment is a perfect example of this.)

But it’s “Mad Men”, so it can’t be that easy. The episode starts innocently enough with Pete on his train ride with insurance salesman buddy Howard Dawes. Dawes brags about his apartment in the city where he happens to be hiding a mistress. Pete, locked into “early Draper” mode, does seem to be a little interested but knows that there are severe risks involved.

Pete’s contemplating gives way to Megan’s hushed dinner plans. Tip-toeing around Don, she lies to Peggy about her plans. Don calls Peggy late at night asking if she’s seen his wife. Peggy doesn’t appreciate this at all. Later that night, Megan comes home to Don who was worried but seems complacent with his wife’s explanation.

The next day, Peggy corners Megan in the women’s bathroom to berate her for putting her in that position. Megan spills the beans about her true whereabouts: she was auditioning for an off-off-broadway play. It seems like her father’s talk from the previous episode resonated with her and she wants to rekindle her dream of acting. But Don seems smitten with her in the role of copywriter at SCDP, and Megan feels that telling him would only bring disappointment.

Pete, meanwhile, goes about his business. On the way home, he comes across Howard’s wife Beth who is worried about when her husband will come home. Pete, fully aware of Howard’s cheating ways, only lies to Beth and badly at that. Pete’s sympathy goes so far that when he drops her off at home, he comes inside to attempt to further apologize — and only ends up in affair of his own. The rest of the show finds Pete trying to make something happen with Howard’s wife, but he’s toeing a very thin line.

That night, Megan wakes up Don and announces to him her plans to resume acting. Don doesn’t seem thrilled, but he does support his wife no matter what she wants to do. Just that it be the choice that she wants. The next day at work, Megan tearfully announces that she’s leaving. Despite being initially nonplussed about the ordeal, even Rizzo and Ginsburg offer their well-wishes. But the look on Don’s face when he’s alone and later with Roger shows that he’s not 100% into this move, at least for right now.

Which brings us to the best part of the episode: the Cool Whip taste testing. Don and Megan came up with a pitch-perfect husband-wife scenario to pitch to Cool Whip at the urging of Ken. With Megan out, Peggy takes a stab at the real thing… and botches it. Horribly. What results is a big blow-up from Peggy and Don about Megan. Don accuses her of pushing Megan out at work and feels that Megan truly loved her job or would eventually. Peggy takes insult to this accusation, saying she’s been nothing but a friend. The two fail to reach common ground.

The final scene leaves us with the Drapers at home. Megan is about to leave for acting class and Don is ready to unwind. Megan hands him the latest Beatles album, Revolver, and asks him to play the last track, “Tomorrow Never Knows“. Psychedelic sounds swirl around the room as Don listens. Scenes from Pete’s ordeal mix with Peggy smoking weed to relax at work, to Megan seeming in her element at acting class. But as Don listens he fails to get the songs message of letting oneself go to the idea of love and it isn’t long before he turns it off towards the end. This episode it seems Pete and Megan are getting closer to what they truly want, while Peggy and Don continue to reject the changing climates around them.

BAMF: Roger, who got some delight out of seeing Pete carry all that awkward ski equipment around.

Maddest Man: Peggy, who is tired of being the middle (wo)man in any of Don and Megan’s predicaments.

“Hey, it’s That Guy/Girl!”: Yep, that’s Alexis Bledel of “Gilmore Girls” fame as Howard’s wife Beth Dawes. And Dennis Haskins aka Mr. Belding as the Cool Whip guy. From the looks of it, I guess he said yes only at the words “Cool Whip”.

Have a Seat: “The Other Woman”