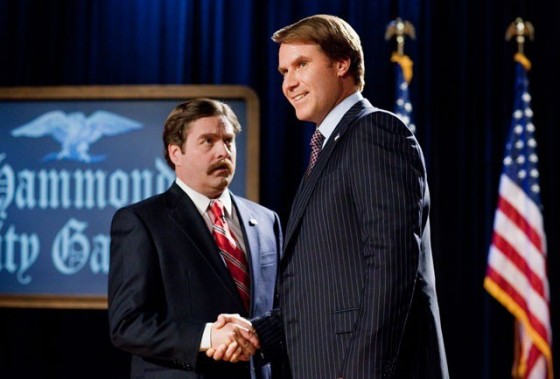 So last summer was sort of disappointing, action blockbuster wise, and most of the attention fell on the many R rated comedies that came out like Bridesmaids, Horrible Bosses and The Hangover Part II.  This summer is the exact opposite, with massive action movies like The Avengers, The Dark Knight Rises and Expendables II dominating the summer and comedies being put on the back burner.  There’s The Dictator, Ted and now we get a look at The Campaign, which stars Will Ferrell and Zach Galifinakis as rival candidates vying for a senate seat in North Carolina.  Ferrell is Cam Brady, the five time congressman who wins because he runs unopposed and Galifinakis is Marty Huggins, director of a small town tourism center.  It looks like both guys are firmly in their comedy zones as Ferrell is super cocky and Galifinakis is naive and kind of creepy and there’s some really funny looking moments from both guys.  Dylan McDermott and Jason Sudeikis co-star and the movie is out in August.  You can check out the trailer below.