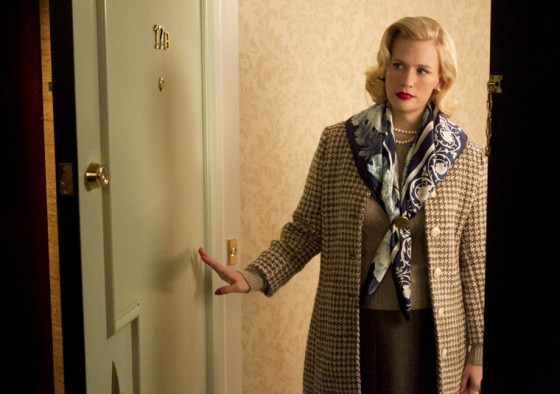 The American Dream is an ancient cliche in this day and age, but in the ’50’s and 60’s it was the way of life. The cookie-cutter house in the suburbs, the well-paying job, the  two-and-a-half kids, the whole nine yards. It was what Don thought he had in Betty, and it’s what she thought she found in Henry.

The “Dream” has not been kind to either of them as of late. Last season saw Don struggling to his new single life, only to be whisked off his feet by his newest secretary. Betty thought she had her meal ticket punched with hot-shot political figure Henry Francis.

Now, over halfway into this season, the tables have turned. Don is living the high life in his swanky Manhattan apartment with his smoking-hot young wife. While Betty tries desperately to lose weight while being tied down to Henry’s floundering campaign.

So it makes a little bit of sense why the petulant Betty would drop a bomb like “Anna Draper” on her daughter. Overwhelmed with jealousy on Don’s new life, she tries to wedge tension between the already somewhat tense Drapers. Sally plays her role to a tee, but Megan proves the adage “cooler heads prevail” before Don fully freaks out. It all implodes right back in Betty’s face.

“Mad Men” has tought us that lows are lows and highs are highs. That is, there are some pretty petty characters on this show and the most petty of them all is Betty herself. She can’t stand to see the man she casted aside finally enjoying his life. Her weight and husband’s failures don’t help either. The “Anna Draper” slip was intended to get her some satisfaction, only Don (and moreso Megan) prevailed once again.

Don already has his share of problems, most recently his creative block at work. He squares up against the wunderkind Ginsberg, who has the slight edge due to the fact that the creative team enjoys his Sno Ball pitch more. Don doesn’t like to be one-uped like that but rather than call him out and look desperate, he simply leaves Ginsberg’s idea in the cab. Ginsberg, flying high on his extortion of Roger and the office success of his Sno Ball idea, is a ticked by Don’s actions. But Don simply doesn’t care. It seems like another type of move for the guy who simply didn’t get the new generation in the last episode.

Pete faces his other demon: Howard Dawes’ wife Beth. He seems to be on Cloud 9 for the time being as he fantasizes about her in his office. But his mood is quickly soured about the New York Times feature he helped interview for doesn’t contain one drop of information about Sterling Cooper Draper Pryce. Season five Pete Campbell: still can’t get what he wants.

It makes sense that Don and Pete face these issues of transition. Pete dreams of future glory, while Don just wants to hold on to what he has. And while he may have had a great idea of the Devil in the Sno Ball pitch, I feel it won’t be long until he digs himself deeper at the expense of his co-workers. As expendable as they may be.

BAMF: Ginsburg, who has them hooked on his Sno Ball pitch and is getting a little something under the table from Roger. (No, not like that.)

Maddest Man: Betty, who is green with envy to the point she brings up a skeleton in Don’s closet just to bother him and her daughter. Sally is irritated by it too… how great of an actress is Kiernan Shipka? And Peggy is also miffed by Roger’s latest secret offer.

Line of the Night: “I don’t devote my energy to hating people anymore”, which should be a title to a chapter in “Sterling’s Gold”.

Have a Seat: “Lady Lazarus”