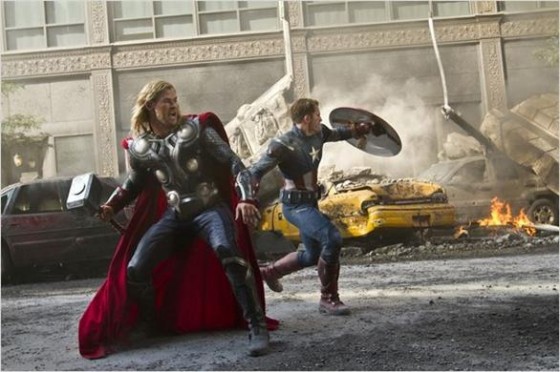 People love them some Avengers, as for the third week in a row, The Avengers was number one at the box office.  The movie made another $55 million, bringing it’s domestic total alone to just shy of half a billion and putting it sixth on the all time grosses list just behind Star Wars.  It’s expected that the movie will move into the top five and maybe even top 3.  In a distant second was Battleship, cementing the end of Taylor Kitsch’s movie star career with a bombtastic $25 million over the weekend, somehow less than his earlier bomb, John Carter, which made just over $30 million.  Battleship cost over $200 million to make and with the amount of other movies coming out every weekend, it will probably end up less than $100 million.  Other new movie, The Dictator, took third place with $17.4 million, less than both Borat and Bruno but not terrible in relation to it’s budget.  The other new movie, What to Expect When You’re Expecting, limped into fifth place with $10.5 million, getting beaten by the already underperforming Dark Shadows, which made $12.5 million in it’s second weekend.  The other major mover was The Best Exotic Marigold Hotel, which has been slowly rolling out into more and more theaters and took sixth place with $3.2 million in only 354 theaters.  It’s supposed to go nationwide over Memorial Day weekend and should jump into the top 5.  Can MIB3 finally be the one to beat The Avengers? We’ll find out this holiday weekend.