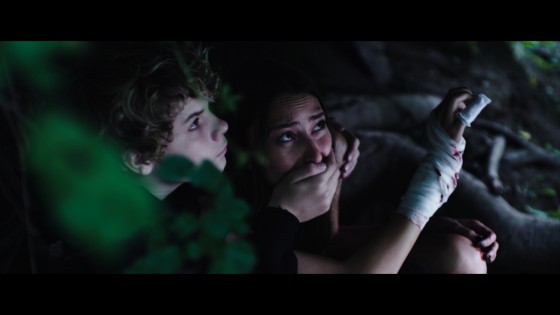 We have a chance for you to win one of two copies of the home invasion thriller, The Aggression Scale, coming out on DVD and Blu Ray on the 29th:

Coming off a successful buzz-creating midnight showing at 2012 SXSW Film Festival, The Aggression Scale is a unique take on the home invasion thriller with two teenagers confronting some heavily armed bad guys who are looking for stolen cash, leading to a bloody battle of wits and will. Directed by Steven C. Miller, the film stars, Dana Ashbrook (“Twin Peaks”), Derek Mears (Friday the 13th, Pirates of the Caribbean: On Stranger Tides) and Ray Wise (“Twin Peaks,” “Reaper”).
When out-on-bail mob boss Bellavance (Wise) discovers that $500,000 of his money is missing, he sends four hardcore hit men (including Ashbrook and Mears) to send a “loud and messy” message to the suspected thieves’ families. But when the killers invade the Rutledge home, they’ll meet the household’s emotionally disturbed young son Owen (Ryan Hartwig). Owen has a history of violent behavior, knows how to make lethal booby-traps and is about to teach these thugs some deadly lessons in extreme vengeance. Fabianne Therese co-stars in the savage thriller that IndieWire called “like Home Alone with more death!”
Anchor Bay Films is releasing THE AGGRESSION SCALE on blu-ray & dvd on May 29th.

For your chance to win, e-mail contact@everythingaction.com with “contest” in the subject line and tell us what your favorite trap from a movie is, like the reverse bear trap from Saw, for example  Also include your name and address in the e-mail and you could win a Blu Ray copy of The Aggression Scale.  You have until May 30th to enter.
Share on FacebookShare on TwitterShare on Reddit