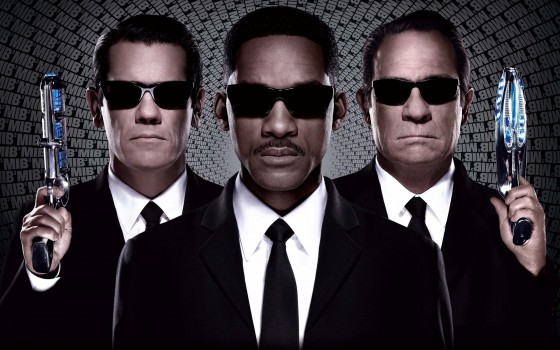 It’s been 10 years since Agents J and K last protected the Earth from the scum of the universe but they’re back for a time traveling adventure that is fun but the series is definitely getting a little tired.

A criminal from K’s past, Boris the Animal, escapes from the high security Lunar Max prison (on the Moon) and time travels back to 1969 to kill a young Agent K and prevent him from installing the Arcnet, a shield system for the Earth that protects it from invasion.  With K dead and the shield inactive, a full scale invasion of Earth by Boris’ species starts and J must time travel as well to protect K, stop Boris and get the shield activated.

Right off the bat, the highlight of the movie is easily Josh Brolin playing a young Agent K.   His impression of Tommy Lee Jones is dead on and it’s a fun return to the dynamic of the first movie where J is out of his element and K is not impressed by anything.  Will Smith is as fun as he always is as well, although it takes a little while for his comedy wheels to start spinning but he and the entire movie get an energy boost when it arrives in the 60’s. The movie does try to build up this emotional side plot involving J’s father, who has never been mentioned before 3 but half assedly builds up to a twist in the final act that probably would have been incredibly interesting if it had been seeded in the first or second movie but is kind of meh with just a few minutes of build up in this single movie.   Tommy Lee Jones could not be more bored and clearly didn’t really want to be in another MIB movie, thus the time travel concept so he would only have to appear in the first 20 minutes and last 5 minutes.  Jermaine Clement is a decent villain although the series still hasn’t been able to top the high point of Edgar from the first movie.  It seems like there might have been some more ideas to make him a quirkier villain but the only thing that is a recurring idea is that he hates being called Boris the Animal.  Newcomer Agent O is basically a non-character in both time periods.  She’s played by Emma Thompson in the present, taking over MIB from the recently deceased Zed and by Alice Eve in the 60’s and both versions have bascially nothing to do, Thompson has one weird joke and then just sets the time travel plot in motion while Alice Eve has literally nothing to do.  The exacerbate that, the movie tries to build this emotional side plot about K and O having a relationship but it goes nowhere and I don’t even think Tommy Lee Jones and Emma Thompson have a scene together.

Like I mentioned above, the first 20 minutes of MIB3 feels really tired with Tommy Lee Jones especially going through the motions of the opening alien bust, at a Chinese restaurant serving alien delicacies to humans.  Once the movie gets to the 60’s though, the setting and cultural jokes give the movie a breath of fresh air.  Getting to the 60’s is pretty cool as well as time travel in the MIB universe involves jumping off a high building with a “time jump” device and building up to speed before activating it.  Once activated, you go all the way back in time, to prehistoric times and you fast forward through centuries with buildings growing around you until you get to time set in the device.  Another fun time travel element of the movie is an alien named Griffin, who is able to see every possibly timeline simultaneously and is constantly pointing out how things point to which timeline they are in.  It’s also fun to see the outdated MIB tech like the battery operated Neuralyzer that needs 5 minutes of charge up time and the giant one at MIB headquarters that requires an entire room full of lead shields and jet packs that are the size of a small car.  It’s also pretty funny that since MIB HQ was already retro styled, the MIB of the 60’s just has shag carpeting and wooden desks.  The climactic final battle also takes full advantage of the setting by taking place at Cape Canaveral as Apollo 11 is about to launch.

If you’re a fan of the MIB series, 3 still has a lot of the fun elements that you enjoy about the franchise, it’s just that some of them are getting tired.  3 is worth seeing for Josh Brolin’s awesome performance and the fun time travel and 60’s setting but there’s a bunch of side plots and elements that feel half finished and  the first movie is still far and away the best in the series.