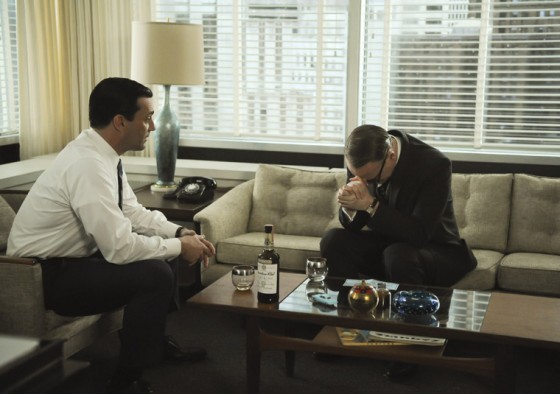 The most intriguing thing I feel about “Mad Men” is how hard it is to figure out sometimes. Why do we care about these characters, their predicaments, their lives? What’s the point being made here, if there is one? Sure, Don Draper is cool. But what is we are ultimately trying to learn from him?

After plenty beating-around-the-bush this season, last week’s episode hit the point home with the juxtaposition of Don’s Jaguar pitch and Joan’s prostitution. It doesn’t take a Rhodes Scholar to see what they were trying to get towards there.

It’s similar this week as the theme is happiness, or more appropriately, how to obtain it. And so it makes sense that the entire episode focuses around sad-sack Lane Pryce. How he came to America with a dream that dies a slow, painful death. Both figuratively and literally.

It’s the check forgery that he attempted a few episodes that comes back to haunt him. With Jaguar landed and the bonuses cancelled, Lane had been scrambling to find a reason to fake a check to himself for $50,000. But Cooper finds out and complains to Don, who finally confronts Lane about it. Lane runs the gamut of emotions here: first by flatly denying anything, then going to a rant about how he never got his initial investment in SCDP back and that it was his money.

Don doesn’t want to hear anything about it. Since his trust in him has been broken, Don offers Lane to resign peacefully. Of course, Lane wants to work it out somehow since he’s in the US on a work visa and losing his job means losing his residence in America. Don doesn’t budge.

Lane ultimately accepts and eventually falls into a tale-spin. He bothers Joan with an off-the-cuff remark about her upcoming vacation, and proceeds to drink a lot more than usual. He stumbles home to his loving wife on time, only to be treated to her purchase of a new car for him, as he “never spends money” on himself. Bad just became worse.

With nowhere to go, Lane finally ends his life. First with a failed attempt to poison himself in the new car, second with a successful attempt by hanging himself in his office. Upon moving the body, Don and company find the standard resignation letter that Don requested earlier.

It’s sad to see Lane go, especially after his absences in a few episodes this season. But I feel he’d run his course as a character, especially after the departure of Putnam, Powell and Lowe. After starting the season on a high note with the lost wallet, the World Cup win, and the “in” at Jaguar, his fortune only spiraled downward from there before it all caught up with him.

Think of last season’s “The Good News”, which found Don and Lane in poor fortune spending a drunken night on the town to forget it all. It was a nice bonding moment for the two, and also a key moment where both men were struggling mightily. Don pulled himself out of his funk, and his line about Lane finding opportunity for happiness after being let go shows that since Don found a way out, that others would too.

Not quite the case. Lane went off the deep end in his despair. At the end of the episode, when Don is taking Glen home after his “date” with Sally, Glen remarks about how all happy things eventually turn into crap. Don earlier dismissed Lane’s distress thinking he’d get over it. This time with Glen, Don asks his what he really wants to do: which is drive a car. Don has a glum look written on his face. He’s learning that just because he pulled himself out of the gutter, doesn’t mean it comes so easy to those around him.

BAMF: Sally, who finally connected again with Glen and became a woman. In more ways than one. Also Don, who’s disdain for the “piddly-shit” accounts of Mohawk and Jaguar lead him to an intense meeting with Dow. He wants the agency on the big time map.

Have a Seat: “Christmas Waltz”