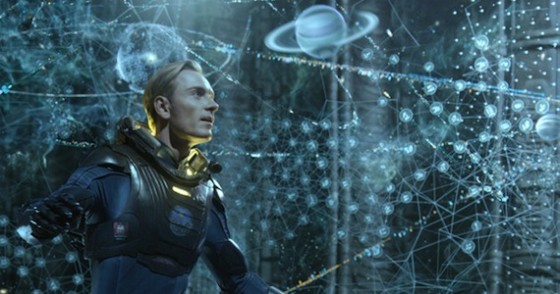 Ridley Scott has directed some of the greatest sci-fi movies of all time, Alien and Blade Runner, and he returns to the genre for Prometheus, a prequel set in the universe of Alien but not directly leading into it.  It has some great performances, gorgeous visuals and thrilling sequences but it doesn’t quite reach the heights of Scott’s other sci-fi classics.

Prometheus follows a scientific team that sets out to explore a planet that a pair of scientists (Noomi Rapace and Logan Marshall-Green) discover in various cave drawings and carvings around the Earth.  They believe they will find the “Engineers”, an alien species who might have been responsible for creating the human race.  Things quickly spiral out of control as the team realizes they have made a huge mistake regarding the Engineers.

Acting wise, Prometheus is pretty strong across the board.  Michael Fassbender is amazing as usual as the android, David, as he varies from charming and helpful to cold and menacing, sometimes within the same scene.  Noomi Rapace doesn’t reach the bad assness of Ellen Ripley as Elizabeth Shaw but she has some great moments, including one of the most intense surgery scenes ever.  Idris Elba plays the captain of the Prometheus, Janek, and adds some welcome comic relief with his laid back southerness and fondness for accordion.  Charlize Theron fulfills the classic Alien role of the evil executive for Weyland Industries.

The biggest problem with Prometheus is that it sets up all these big ideas and concepts and then doesn’t really answer any of them.  It’s kind of appropriate that Lost creator Damon Lindelof was one of the screenwriters because that show had the exact same issue. When the science team gets to Prometheus, they discover an alien structure with a bunch of weird technology but it’s never explained what most of it is and why it’s so important and how it ties into the Alien universe.  The Weyland personnel all have vague agendas that are never really explored or resolved as well.  David, for example, intentionally infects one of the team with a mysterious black goo that kills him, but why do it in the first place?  They do finally give a sort of explanation for who or what the Space Jockey was from the original Alien, although I don’t believe that exact creature is in Prometheus.  The agenda of the Engineers is also not very clear, *spoilers*, they created the human race but then decided to destroy us by using the black goo as a biological weapon.  What did we do to make them want to destroy us and why would they leave a map on Earth to their weapon development planet if they wanted to destroy us?

Fortunately, the minute to minute sci-fi/horror is pretty fantastic to balance out the vague wankery of the overarching plot.  There are some great sequences in Prometheus, including the aforementioned surgery scene where Noomi Rapace must use an automatic surgery pod to remove something growing inside of her.  There’s also a super intense scene where an infected crew member goes bezerk and kills a bunch of the Prometheus crew before getting taken down.  Also, even though they don’t really explain what is going on, the alien technology and the ship the crew discovers is incredibly interesting to look at, with holograms, giant stone heads and weird alien creatures and there’s some great discovery moments.

The movie’s other strength is that it is absolutely gorgeous in pretty much every aspect.  The special effects are top tier and Ridley Scott discovered a section of Iceland that truly feels like an alien planet.  Scott’s attention to detail, that has been used in recent years to make sure things like arrows have period accurate feathers, is used to fully flesh out the future of 2089 and the Prometheus, with just tons of little details making the ship feel like an actual place.

Ultimately, Prometheus is a fun sci-fi movie that overextends itself trying explore big ideas it ultimately never resolves.  The performances are great and it is absolutely stunning visually and has a couple of great sequences but if you were disappointed by the end of Lost and hate unresolved questions, you might want to skip Prometheus.  If you are a fan of Alien, Prometheus is probably worth a look if you want to return to that universe and get some more details about some of the mysteries of that movie.