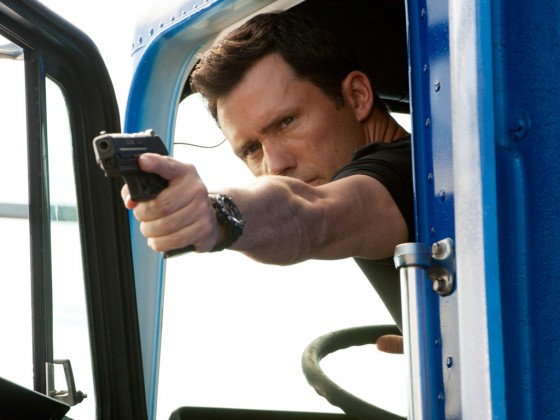 Welcome to the sixth season of Burn Notice and the first edition of our new weekly recap feature.  If you need to catch up, be sure to check out our Up to Speed for Season 5 and then read on to find out what the gang is up to at the start of Season 6.

Season 6 picks up immediately following Season 5, with a fancy new intro sequence, with Fiona turning herself in to FBI custody for the bombing of the British consulate and Michael arriving too late to stop her.  He immediately goes on the warpath, first yelling at Sam for being an accomplice of Fiona’s surrender and then, after getting a lead from Jesse, still at the airport where Michael’s big CIA mission resulted in a plane getting blown up, is able to get into the CIA database and spots big bad, Anson, fleeing down one of the main highways toward a marina to escape by boat.  Michael and Sam give chase and eventually stop traffic with some fancy stunt driving and blowing up a stolen semi truck.

Anson proves as slippery as ever and always has a contingency plan.  Fleeing to a nearby chemical plant, he calls Michael and tells him that one of his unstable Marine patients has been recruited to go to Madeline’s house and Michael has to make the difficult call of trying to get to his mom or going after Anson. Sam is the voice of reason for the entire episode and tells Michael they will never get through the traffic jam they created and that Jesse can get to Madeline quicker.  The two then head to the chemical plant but Anson tricks the guards into opening fire on the pair and trapping them in the guard post with a dead guard on the floor, who Anson shot in the back.  Not wanting to kill guys just doing their job, Michael rubs blood on his arm and he and Sam get the upper hand on the guards by pretending to be shot and Sam plays dead.  They drag the guards into the factory and manage to convince them that they are the good guys and get them to show them how to get an evacuation of the facility started.

Meanwhile, Madeline gets an unwelcome visitor in the form of Anson’s unstable Marine hitman and the police officer Jesse sends ahead is killed.  Jesse gets to the house and is jumped by the Marine but Madeline manages to shoot the assailant through the floor upstairs with her trusty shotgun and Jesse hogties him some zip ties and duct tape.

Fiona, locked down at the FBI, also gets an unwelcome visitor with the return of Jason Bly, a Season 1 and 2 nemesis of Michael who we last saw owing Michael after the two got caught in a bank robbery and Michael managed to outsmart the robbers and save the hostages.  Bly is called in because of his familiarity with Fiona and Michael and tries to convince Fiona to tell the truth of what happened at the consulate, i.e., what was Michael’s involvement?  Fiona refuses to implicate Michael and Bly tries to trick her by showing her the exploded semi truck and saying Michael died in the explosion.  Fiona is the last person you should try to fool in regards to explosions and realizes that Michael caused the explosion since the doors of the cab were not blown off, as they would have been if the explosion happened they way Bly implied it went.  Bly tells Fiona that she will probably get the death penalty for the death of Larry and the two security guards but Fiona has already accepted this as her fate.

Back at the chemical plant, Pearce arrives with some backup and the group believes they have Anson cornered in a turbine room following the evacuation.  Michael proves himself dangerously unstable by pulling a gun on Sam and hell bent on killing Anson but Pearce forces him to back down and act as lookout in the surveillance room.  Michael’s paranoia makes him super aware and he notices a perimeter fence shaking.  He goes to investigate and finds Anson cutting through a chain lock to escape to his waiting boat.  Michael gives him a vicious beatdown but Anson pulls another ace from his sleeve, a dead man’s switch rigged to explosives in the chemical plant.  Michael begrudgingly allows Anson to escape but Anson, the slimeball that he is, detonates the explosives anyway, causing Michael to fear that Sam has been killed.  Sam, of course, emerges with a rescued worker and Michael, in vain, runs to the dock to try and take a shot at Anson, but he manages to get away.  Pearce assures Michael that Anson is now one of the CIA’s most wanted and Michael becomes even more resolved to catch him and save Fiona.

It’s definitely nice to have a more serialized Burn Notice, especially when they have a villain as great as Jere Burns’ Anson.  I love the case of the week style of the first couple seasons but it definitely can get old when there’s yet another insurance scammer the gang has to trick into submission.  There were no scams, no wacky accents, no last minute saves, just Michael, pissed off and out for blood, which is cool.  I’m sure we’ll get back into a case of the week style fairly soon but I hope the main storyline stays more in the spotlight.  Shows like Justified have proven that you can do a combination of serialized and singular stories succesfully and even though Burn Notice is supposed to be more fun and lighter, it can still do something similar.  I’m excited to see the what sort of jail break the guys are eventually going to come up with to rescue Fiona and if Michael will finally manage to catch Anson.

When You’re a Spy: Under the Gun