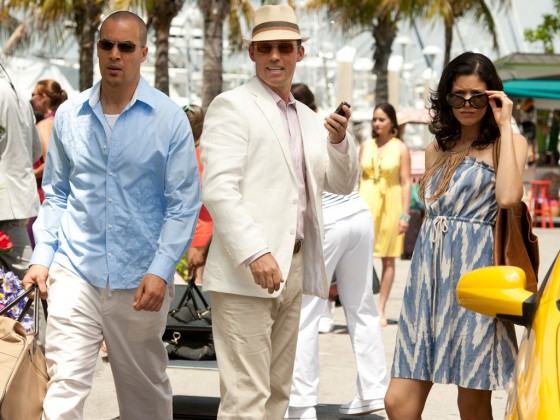 Fi continues to work her way through jail while all hands are on deck on the outside to help take down the man who killed Agent Pearce’s fiance.

Pearce asks Michael and Jesse to meet her at the bar and reveals that Anson left her a voice message and information about the man who killed her fiance, Jay, in an attempt to get her on his side against Michael.  Pearce has no intentions of trusting Anson after seeing his handiwork in the season opener but can’t pass up the opportunity to get justice so, she, Michael and Jesse pose as cruise ship passengers and follow the murderer, Ahmed Damour, while Sam, Madeline and Nate follow Damour’s son, Sharif in Bermuda.  The gang works out a plan to trick Ahmed into thinking he’s caught a deadly viral infection so that he will reveal the location of a hard drive with information that the CIA is protecting him to get to.  The gang basically slip him a mickey at the ship’s casino that causes him to collapse and develop a high fever and then Michael poses as Dr. George Penderson, sans wacky accent, of the CDC and keeps upping the seriousness of the diagnosis until Ahmed calls his son to take over his deal to sell the hard drive to a group of Russians, which Sam and Nate manage to intercept and Ahmed and his son are heading to a dark hole of a prison and the CIA gets the information it wanted without having to protect a murdering scumbag.  I think the show missed a great opportunity to utilize the cruise ship environment for some sort of elaborate con on Ahmed.  Instead the entirety of the action takes place in the ship’s infirmary after the initial drink spiking in the casino.  It would have been fun if the trio had posed as tourists and Ahmed had the hard drive on him on the ship and the gang had to figure out some way to get him out of the room and steal the drive, while constantly bumping into him as wacky, annnoying tourists.  Also, please tell me Nate is going to be heading home soon.

Fi, meanwhile, meets another classic prison character, the “I can get anything” person, this time cagey Ayn in Fiona’s new cell block, where she is moved after her altercation with DB last week.  Fi asks if Ayn can find out who’s trying to kill her and she says she can in exchange for a favor.  Fi has to figure out a way to seal off the cell block door for about two minutes and she accomplishes this by making a incendiary device out of some plaster of paris, tuna fish cans and a sparkler, which melts the steel of the door and allows Ayn and her cronies to, steal stuff that Ayn can already get?  I’m not really sure what the whole point was but Ayn does give Fi the name of a corrupt prison guard, which Ayn manages to get to Michael after he finally gets to visit Fi for the first time in the season in a scene which will surely go down as one of the most overly dramatic and cheesy as Michael busts out his Michael McBride irish accent in the visiting room and then is quickly drowned out by a horrible, downbeat love song.  We’ll probably have a few more weeks of Fi in prison until the gang either breaks her out or manages to get enough brownie points with the CIA to get her released.

So, not the greatest episode of the show but it did have a few fun moments, I just wish they had taken advantage of the cruise ship environment and come up with a more clever way to trick Ahmed other than, “you’re sick, you’re getting sicker, you’re dead” and also, how do you not put Sam on a cruise ship, with his penchant for mojitos and Hawaiian shirts?  Anyway, we’ll see you back here in two weeks, as the Burn Notice gang, and all of USA, are taking the Fourth of July off to celebrate America.

Who Am I?: Dr. George Penderson, CDC, although without a crazy accent (although we do get the cameo from Michael McBride)

Spy Tip of the Week: Another useful prison invention this week, tuna can incendiary devices.

When You’re a Spy: Down Range