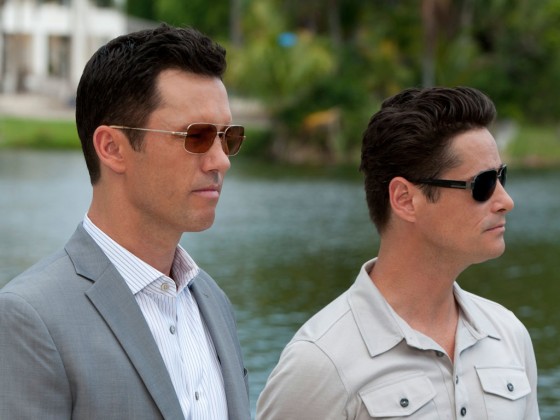 Michael finally catches up to Anson on this week’s Burn Notice but pays a pretty heavy price while Sam has to go solo to help Barry and Fi has one more obstacle to gaining her freedom.

So last week Michael learned from Rebecca that Anson was expecting a drop of cash and documents in Atlantic City and Michael convinces Pearce to utilize the full force of the CIA to catch him.  Pearce agrees but tells Michael that Sam can’t be involved because the agency is afraid he’ll blow the mission.  They do agree to let Nate come along; bumbling gambling addict vs retired Navy SEAL, yeah, they made the right choice.  Jesse goes along as well along with a full complement of undercover agents.  Even though this was supposed to be the big climax to the Michael vs Anson plot, this part of the episode kind of got put on the back burner and every time it came back in, it was because Nate was doing something stupid to jeopardize the mission, causing Michael to finally explode at him and kick him out.  Of course, this means that *Spoilers* Nate is the one that is killed at the end of the episode along with, surprisingly, Anson.  Both are sniped by an unknown assassin.  It was kind of anti climactic for a villain as great as Anson and hopefully they don’t do another “here’s the person who is ACTUALLY in charge” that they’ve done for the last couple of seasons.  The show also went a little overboard with trying to force emotion into Nate’s death, with a emotional song playing, slow motion, Maddie punching and crying Michael when he tells her what happened, etc.

Thankfully, the part of the episode that took up most of the episode and was awesome was Sam’s solo mission to help the gang’s money launderer, Barry, acquire some documents that he’s storing at a client’s house.  Unfortunately, an angry mercenary also wants the documents (played by the always awesome William Mapother), and Barry dead, and they trap the guys inside the house.  Fortunately Sam has a shotgun with a couple of shells and a fridge full of beer and he’s able to improvise a motion activated zip gun from a security light, a fake US Marshall badge and a couple of bacon fueled smoke bombs.  Eventually they have to blow up the entire house, taking out the mercenary, Gary Hartley and his crew while the guys hide under a porcelain tub.

Finally, Fi finally got released from prison but she had one more obstacle before breathing free air.  Arthur Myers, an MI6 agent, is angling to get Fi tried for her various crimes she committed while a member of the IRA and threatens her family in Ireland if she doesn’t sign a new confession.  Fi convinces Ayn to hide her in the library so she’ll miss Myers coming back and then Ayn can find her and make herself look good to the warden.  That’s pretty much it, Fi has to dodge a guard dog but she just hides out and then, when Anson is finally stopped, the CIA is finally able to get her released.

So it was a great Sam episode and just an OK Michael and Fi episode.  It sounds horrible but I’m kind of glad Nate is finally gone, as he was a pretty lame character and the show always thought he was way more important than he was and gave him way more responsibility than he should have had.  Like I mentioned before, Anson had a pretty anti-climactic end for being what should have been the ultimate villain of the show and I hope that they don’t go down the road of there was someone even more powerful that Anson was actually working for and then we spend the rest of the season trying to figure out that is.