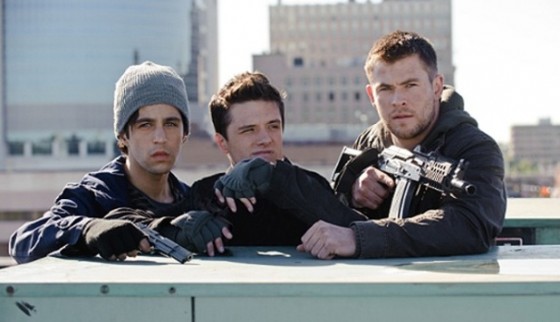 Seemingly delayed forever due to the bankruptcy of MGM, the Red Dawn remake is finally seeing the light of day this Thanksgiving.  Unlike the 80’s classic, this time North Korea is invading America, not Russia, and they have some sort of EMP device that allows them to sneak in undetected.  After the invasion it’s up to a group of teens, led by Chris Hemsworth, to start  a rebellion against the new overlords.  Josh Hutcherson, Adrienne Palicki and Josh Peck co-star.  Even more than the Total Recall remake, this feels like a movie that just has no reason to exist, there’s nothing in this trailer that looks like it’s improving or twisting something from the original.  Jeffrey Dean Morgan is a pretty brilliant fill in for Powers Boothe, I have to say.  Check out the trailer below.