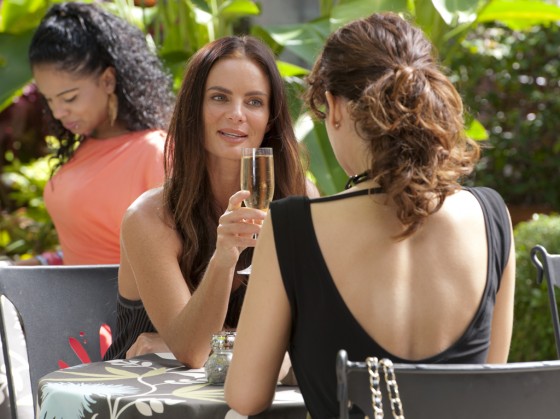 The investigation into Nate’s murder continues but the gang’s least favorite CIA agents arrive to pull Fi into an undercover assignment.

So the group figured out that a private security firm called The Pryon Group are the ones who purchased the sniper rifle that killed Nate and Michael and Sam set up a meeting with the CEO, Jack Vale, and his weaselly assistant, Thompson. Michael poses as a wealthy businessman named Kruger who needs some Pryon muscle for security for his operations in the Middle East.  The hope is that they can see personnel files and narrow down suspects but Vale does not disclose his records for security reasons.  Vale offers a tour of their camp in North Carolina so they can see some of their potential recruits, which Michael accepts but he’s sidetracked by the most incompetent CIA agents ever, Bailey and Manaro, who abandoned Sam on his mission to Colombia in “The Fall of Sam Axe”.  They arrive at Michael’s loft to recruit Fi for an undercover assignment and, because of her prison release agreement, she has to do it as she’s now an asset.  Michael stays behind in Miami to make sure that Bailey and Manaro don’t screw Fi, so Jesse and Sam head to North Carolina

Fi poses as an old friend of another CIA asset, Angela, who’s boyfriend, Durov, is possibly going to be selling weapons to terrorists on the black market.  Fi has to break into Durov’s safe to get a thumb drive with his records to give to the CIA.  Bailey and Manaro manage to almost blow Fi’s cover twice, once by not having anyone surveil Durov while he’s at a meeting, so Fi is almost caught breaking into the safe and again when they and Michael try to get Fi a drill through an auto body shop but get into a fight with the mechanic.  Eventually, Fi gets the drill and a diagram of where to drill and breaks in but, in typical Burn Notice fashion, Angela reveals that she is the one who is going to sell secrets on the black market and was using Durov, Bailey and Manaro for her heist.  She locks Fi in Durov’s office with an explosive device and Michael is forced to blow up the CIA surveillance van to lock down Durov’s complex.  Using some quick thinking, Fi is able to get herself free and force Angela to disarm the bomb and reveal who she really is by giving Durov’s men false info on how to disarm the bomb, forcing Angela to do it or blow up.  With Angela arrested and a job well done, Manaro and Bailey agree to “lose” Fi’s CIA asset paperwork if Michael and Fi don’t reveal how badly they messed up.

Meanwhile, in North Carolina, Sam and Jesse work on manipulating Thompson, who seems to be greedy and willing to give up Pryon for the right price.  The guys offer him a seemingly cushy job with Kruger and he agrees to turn the other way while Jesse and Sam gather info on the possible Pryon snipers.  They find a highly likely suspect but the file only has the initials “T.G.”.  Back in Miami, Michael and Sam meet with Vale again, who confronts them about looking up T.G., who it turns out is Tyler Gray but Vale is killed before he can give the guys anymore info.

Next week is the big summer finale with Michael hopefully confronting Gray and wrapping up the Anson/Nate murders and then moving on to whatever is the next over arching plot for Burn Notice.

When You’re a Spy: Unchained