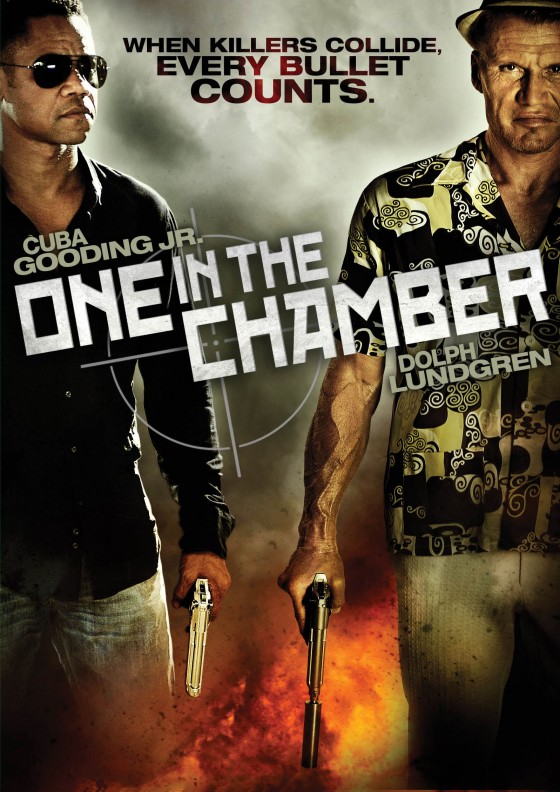 We have another pair of  Blu Ray combo pack to giveaway this week, this time the Dolph Lundgren vs Cuba Gooding Jr. hitman movie, One in the Chamber.  Here’s some info about the movie:

Anchor Bay Films presents the non-stop high intensity ONE IN THE CHAMBER, where a double-cross is as simple as ink on paper. Boasting an incredible cast including Oscar® winning actor Cuba Gooding Jr. (Jerry Maguire, Radio, Men of Honor), Dolph Lundgren (Rocky IV, The Expendables, The Expendables II) and ClaudiaBassols (CBS’s “Rob”), ONE IN THE CHAMBER explodes on Blu-ray™/DVD Combo pack and DVD on August 21st.
SYNOPSIS
In Prague, two skilled assassins make themselves available for hire to the Mafia. However, when one assassin, Carver (Gooding) takes a job with a gang he was once hired to eliminate, it launches into an all-out mob war where survival is about as certain as the number of bullets left in the clip. To make things worse, another assassin (Lundgren) has been hired to take out Carver and the result will make the streets run red. As Carver battles with his inner demons as well as his very real enemies, ONE IN THE CHAMBER doesn’t let up until the very last man goes down.
Bonus features on ONE IN THE CHAMBER Blu-ray™/DVD combo and DVD include audio commentary with director Will Kaufman.
ONE IN THE CHAMBER is directed by Will Kaufman and produced by Brad Krevoy, Patrick Newall and Justin Bursch. Story by Benjamin Shahrabani, and screenplay by Benjamin Shahrabani and Derek Kolstad. Executive Producers are Reuben Liber, Mike Callaghan, Francisco J. González, Roman Viaris and Kevin Kasha.

Same deal as our Hijacked giveaway, you have until 11:59 PM on Friday, August 24 to enter and you can enter on all of our various social media sites and, for this contest, tell us your favorite Dolph Lundgren movie for your entry.
Share on FacebookShare on TwitterShare on Reddit

Exclusive Clip: “One in the Chamber” – The Wolf’s Introduction