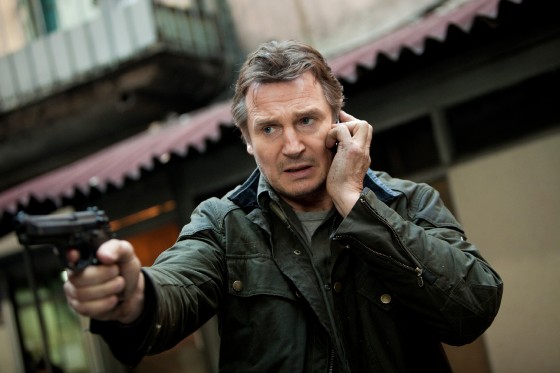 When Taken burst onto the scene four years ago, it was amazing for a number of reasons, not the least of which was Oscar nominated actor Liam Neeson transform into one of Hollywood’s biggest action heroes.  In the four years since Taken, Neeson has kicked plenty of ass in a number of movies, so Taken 2, while solid, doesn’t really bring anything new to the table.

Taken 2 picks up an indeterminate time after the original, with CIA agent Bryan Mills still working on his relationship with his daughter and ex-wife, the former of which has been dating a boy behind Bryan’s back and the latter going through a bitter separation from her second husband.  Bryan has a security job in Istanbul and invites the girls to join him when it’s finished, which they accept but the relaxing vacation quickly turns dangerous when they realize they are targets for the revenge seeking father of Marco, the man Bryan electrocuted in Taken, and the rest of the criminal gang.

Taken 2 is directed by Olivier Megaton, who pretty much ruined The Transporter series with 3 and directed the god awful Colombiana last year.  Taken 2 is much better than those last two efforts but pales in comparison to the original.  The original’s pacing was fantastic as Bryan moved his way up the ranks through the Albanian criminals before exploding into great action sequences.  Taken 2 features solid action but it is nothing special and it’s shot about as standard as you can get.  It also features some annoying cuts and editing, especially during hand to hand fights, possibly to keep it PG-13 and there are some absolutely baffling kills where it seems like the bad guys are killed by the sheer awesomeness of Liam Neeson.  One thing that was coming out before the movie was that the plot summary made it seem like Maggie Grace was going to somehow become a bad ass like her dad but fortunately in the movie she just follows his instructions to help him escape when he and Lenore are captured and she shows off her driving skills during the big car chase (and it’s funny because she’s failed her driving test three times!).

Liam Neeson is fantastic as always and, even though it’s fairly routine at this point, it’s still fun to see him shooting up and punching bad guys.  The first movie put Bryan into some fun scenarios and he had some fantastic bad ass moments but there’s not as much in 2.  There’s no great interrogations or escapes, he just enters a room, shoots everyone and moves on.  Something you could possibly argue was missing in the original movie was a main villain, which Taken 2 has in fantastic character actor Rade Serbedzija, who is usually Russian scientists and military.  He’s the leader of the Albanian syndicate but he is so incredibly one note that it’s kind of a waste having a great actor in the role.

Taken didn’t really set itself up for a sequel and Taken 2 doesn’t really do anything to prove it was necessary, but it is solid enough action wise.  I would definitely not rush out to see it in theaters but if you want to see Liam Neeson kicking ass, it would probably be a good rent when it comes out on DVD.