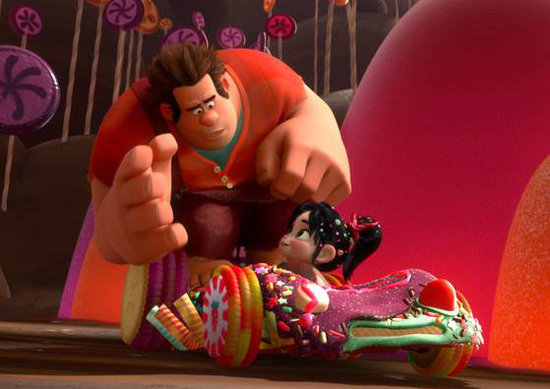 Wreck it Ralph, the latest from Disney Animation, promised a whirlwind, cameo filled journey through video games and for the most part, it suceeds, although not quite to the level I was hoping it would.

The movie follows the eponymous Ralph, who is the villain of an old school arcade game, Fix It Felix Jr.  Fed up with 30 years of being left in the mud and living in the shadow of hero, Felix, Ralph decides to try and earn the respect of his fellow game characters by getting a medal and becoming a hero.  To accomplish this he “game jumps” to different games, first the intense, futuristic shooter “Hero’s Duty” and then the diabetes inducing cart racer, Sugar Rush.

The first half of Wreck it Ralph is exactly what I was hoping it would be, tons of great cameos from classic gaming characters like Zangief, M. Bison, Q-bert, Sonic and tons more and lots of great jokes and observations about the world of video games.  Ralph attends Bad Guy Annonymous meetings with his fellow villains and they meet in the center ring of Pac-Man, characters hang out at the bar from Tapper and everyone hangs out in a surge protector call Game Central Station.  When you first see the expanse of Game Central and all the characters, it is mind bottling and your eyes do not know where to look first to try and spot characters.  The first game that Ralph enters as well, Hero’s Duty, is absolutely spectacular, with scoring by Skrillex and a sensory overload of action, but it is over way too quickly. There’s also a great running joke about characters “going turbo” that pays off wonderfully at the end of the movie.   The majority of the movie takes place in the game Sugar Rush, which looks amazing but once we’re there, unfortunately, the great video game jokes are put on the back burner for jokes about the candy structures and characters of the game.  A mountain made of Diet Coke hot springs and Mentos stalactites is great but I came to see Ralph hanging out with old school game characters, not Candyland: The Movie.

The characters of Wreck It Ralph are all pretty great and keep you invested even through the video game less second half of the movie.  John C Reilly is great as Ralph, Jack McBrayer brings his usual Southern charm to Felix, Jane Lynch is incredibly bad ass as Hero’s Duty protagonist, Sgt. Calhoun and Sarah Silverman is surprisingly adorable as Sugar Rush racer, Vanellope Von Schweetz.  Alan Tudyk is also fantastic as the flamboyantly evil King Candy.  The movie does a great job of giving each character a sub-plot and then tying them all together during the climactic Sugar Rush race.   The animation for all the characters is also incredible, easily on the level of Pixar.

Wreck it Ralph is definitely worth seeing but you should adjust your expectations and prepare to spend most of the movie in the candy filled world of Sugar Rush, as opposed to the 80’s and 90’s video game world promised by the trailers and posters.  It’s a fun movie with great visuals and voice acting, I just wish it had lived up to what seemed like the premise of the movie, which was Roger Rabbit with video game characters.  If you’re going to check it out, I would also recommend you see it 3D, because it definitely pops of the screen.