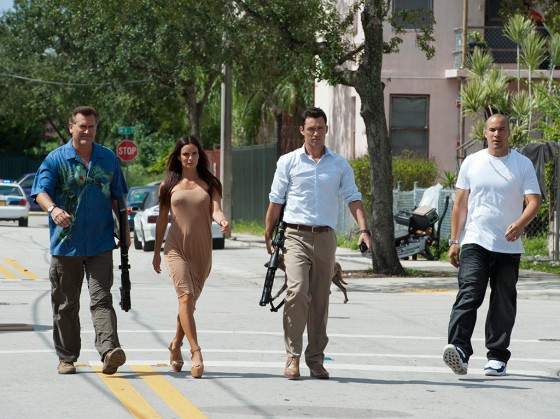 Burn Notice is back for it’s winter premiere with two episodes.  I usually try to get these recaps up right after the episodes air but I a) forgot the premiere was on and b) didn’t have time to watch them until last night.  I have them watched now and the rest of the season should be on time, so let’s get right into it.

When we last left the Burn Notice crew, they were stranded in Panama after taking down Nate’s killer, Tyler Gray, and being betrayed by Michael’s CIA ally, Tom Card.  In the first episode “Desperate Measures”, the gang tries to find a way back to the states and manages to hijack a cartel cargo plane with some flirting and gun pulling by Fiona.  The group is seemingly on the way home when Gray breaks his zip tie handcuffs and gets into a fight with Michael, throwing them both off the plane and getting them captured by local drug kingpin, Ramiro Vasquez.  Sam, Fi and Jesse attempt to make a deal with Vasquez to return his cocaine but Gray tries to make a deal and uses his intelligence training to extrapolate where the group grounded the plane, since they would never leave Michael.  Gray and Michael are being tortured by electricity the entire time.  The trio at the plane is force to back off but Fi pulls a risky move of Trojan Horseing herself in the plane and letting Jesse and Sam back onto the airfield.  Meanwhile, Gray realizes that Card gave him a fake profile on Michael after witnessing him refuse to give up his friends and he frees them both and the group reboards the plane and escapes.  It was a little lackluster after the great cliffhanger of the summer finale but it was solid and there were some fun spy tips, like how to make anti vehicle mines out of coffee cans.

The second episode back, “Means & Ends” brings back Fiona’s prison friend, Ayn, now released on parole but being hassled by a corrupt cop named Garza.  Ayn killed her abusive brother in law, who was Garza’s informant on local gang leader Sherrod Williams, who killed Garza’s partner.  The gang busts out their typical strategy when dealing with corrupt cops, try to get him to do something illegal they can use to get him arrested and to accomplish this, they send Jesse undercover as a potential new informant named J-Train and it’s hilariously bad to see him act “street”.  Garza throws a wrench in the plan however by becoming super regretful and honorable and attempting to arrest Sherrod and his gang single handedly in his full dress uniform, which will certainly get him gunned down.  Michael and crew quickly rig up some explosives and provide him with some cover fire and Garza gets back up to finally arrest the gang.  On the ongoing plot front, Michael and Fi were forced to burn the loft in order to keep up the charade that the crew died in Panama while Michael works with Gray to take down Card.  Card has Gray meet him at an office and a team rolls in in a van, which Michael assumes are there on Card’s orders so that he can be arrested and have everything pinned on him.  Michael breaks up the meeting but Card kills Gray and then attempts to bring Michael over to the dark side, telling him that there is tons of work to do but Michael shoots him in the head.  Also, Madeline is leaving Miami because she’s sick of Michael giving up his morals in his constant chasing of villains.

It was a solid case of the week episode with Jesse’s hilariously bad street persona but I’m not sure where the show will go now with both villains killed now.  I assume Michael will have to dodge a CIA investigation for the rest of the season and then find out there’s someone else who is out to get him.

When You’re a Spy: Split Decision