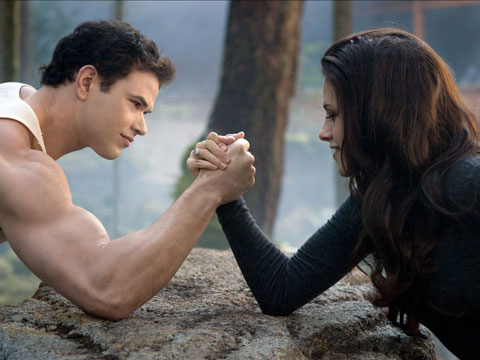 It’s not surprising that Breaking Dawn Part 2 dominated the box office this weekend.  The final Twilight movie made $141.1 million, the fourth best opening of 2012 and the eighth best of all time.  New Moon is still the best opening of the franchise, with $142.8 million.  Skyfall dropped down to a still strong second place with $41.1 million and it will definitely become the highest grossing Bond movie of all time.  Third place went to Steven Spielberg’s biopic, Lincoln, which expanded to a wide release over the weekend and pulled in $21 million.  Wreck-It Ralph and Flight rounded out the top 5.  In eighth place, out of nowhere, was the Indian romantic movie, Jab Tai Hak Jaan, which opened in 161 theaters but made $1.3 milion.  Three new movies are out this weekend but none of them really seem like they could knock Twilight off the top slot.