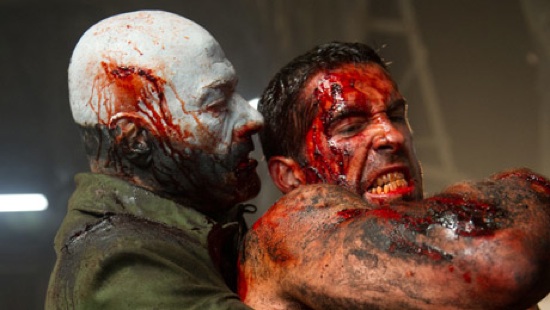 The Universal Soldier franchise is a strange beast in, despite the fact that there are now four proper movies, there’s really no sense of continuity besides Jean Claude Van Damme’s Luc Devereux.  Day of Reckoning, the latest entry in the series, takes the franchise in a weird, brutal and ultimately, pretty damn fun, direction.

The story this time around, the main character is not JCVD’s Luc Devereux but instead follows Scott Adkins’ John, a normal family man whose wife and daughter are murdered in a home invasion, perpetrated by Devereux.  After recovering, John sets out for revenge and uncovers an underground army of Universal Soldiers, led by Devereux and a resurrected for the third time Andrew Scott, played by Dolph Lundgren.  Story has never been a strong suit of the UniSol series but this one at least tries to shakes things up with JCVD playing the villain and flip flopping between who Adkins really is until they cement it for the finale.  The whole “army of rebel UniSols” story doesn’t really go anywhere as well and there only seems to be one government agent working the case, which is insanity.

The one thing that Day of Reckoning excels at is utilizing it’s R rating, especially in the fantastic, brutal fight scenes.  At the end of each fight, you can usually expect the room the fight is set in to be completely destroyed and both combatants covered in blood.  One of the best parts of the previous film, Regeneration, was a sequence that tracked Van Damme as he raided a building full of bad guys and Day of Reckoning one ups it with an awesome sequence following fully unleashed Scott Adkins basically taking down the renegade UniSol army single handedly, leading up to taking on Lundgren and Van Damme.  As mentioned, the fights are super brutal as well, with Adkins getting his fingers chopped off at one point, evil assassin Andrei Arlovski getting half his foot chopped off and various limbs and heads getting chopped off or blasted off.

Van Damme was fantastic earlier this year as the villain of The Expendables 2 and he’s also pretty great in Day of Reckoning but he’s much creepier and serious with a shaved head and almost a Col. Kurtz from Apocalypse Now vibe going on.  Dolph Lundgren is unfortunately more of an extended cameo but brings some much needed comic relief to his scenes.  It can’t be argued that Scott Adkins is not a great martial artist but he’s still not quite up to being a leading action hero, he lacks the charisma and charm of other action stars.

Day of Reckoning might be the best entry in the franchise since the original movie and tries to shake things up with Van Damme becoming the villain and the more psychological identity crisis plot of Scott Adkins’ character.  There are some fantastic fight scenes and it relishes in it’s R rating.  If you’re a fan of the series, or just solid action in general, Day of Reckoning is definitely worth checking out.

Action Hero of the Week: John