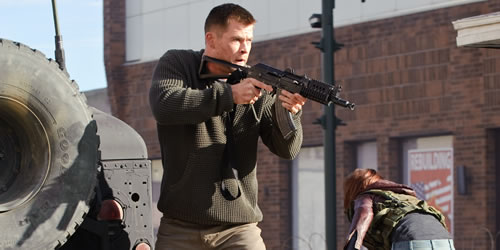 Long delayed due to the MGM bankruptcy, the remake of Red Dawn finally came out this past weekend but, was it worth the wait or should it have stayed on the shelf?

Following the same basic plot as the original, the new Red Dawn finds a group of teens being forced into becoming guerrilla fighters when North Korean troops invade their hometown of Spokane, WA.   There’s a vague intro about the economy collapsing in many European countries, Russia being taken over by ultra nationalists and North Korea getting more and more aggressive but it doesn’t have the threat of the original, when people actually believed a Soviet invasion could be imminent.  The remake follows along the same major plot points but besides a major character death that I honestly didn’t see coming, it doesn’t really do much to justify it’s existence or say anything new with the modern setting.

The cast does an OK job for the most part with Chris Hemsworth pretty much carrying the movie on his shoulders.  Josh Hutcherson gets some good moments as the group’s resident nerd/electronics expert and Jeffrey Dean Morgan shows up for the end battle but doesn’t get a chance to establish his character like Powers Boothe did in the original.  The villain, played by Will Yun Lee, who is establishing himself as the go to Korean bad guy,  is just there to be silent and evil while the villain of the original movie, Col. Bella, had a little bit more depth.

Probably the weakest part of Red Dawn is the direction of the action.  For the most part it’s decent and there’s some fun ambush sequences by the Wolverines but the more intense it gets, the crazier and shakier the camera gets.  If you thought the hand held camera work of the Bourne movies was distracting, they have nothing on the new Red Dawn.  It’s not even to avoid violence either to get a PG-13, it seems like a stylistic choice by director Dan Bradley that fails horribly.  I also never really bought these Wolverines as growing into resistance fighters.  There’s a quick montage of training that seems to  take place over maybe a couple of days and then they are instantly able to cause chaos for the Koreans but their battle also seems to take place over maybe a month.   In the original, you got the sense of how dragged out the war was and how the kids gradually grew more and more hardened as it went on and learned more and more skills.  The new movie uses the crutch of Chris Hemsworth being a Marine to justify how quickly everyone is able to learn how to fight.

The new Red Dawn is a decent action movie but I doubt it will become as beloved as the original, even though the original is beloved now because of how fun and cheesy it is and the cast it had.   There’s really no reason to watch the new one over the original but it might be worth a rent if you’re curious; You definitely don’t need to head out the theater to see it.