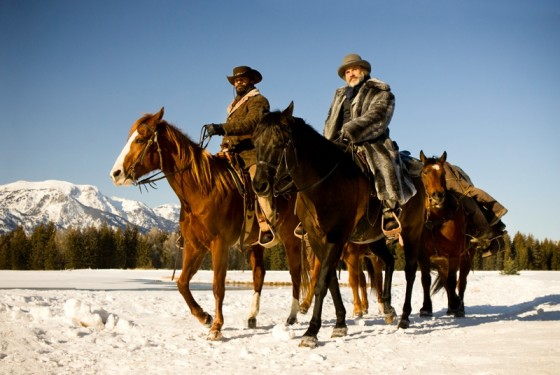 The first genre term that came out from critics regarding 2009’s “Inglourious Basterds” was “revenge fantasy”. So it’s safe to assume that “Django Unchained”, the story of a former slave teaming up with a scheming German to take down a plantation owner, would invoke a similar theme. After watching, it’s a fairly accurate term. But it’s a bit deeper than that.

Jamie Foxx stars at the titular Django, who teams up with dentist-turned-bounty-hunter Dr. King Schultz (Christoph Waltz). After freeing Django, Schultz takes him in on the account that he can tell who his next targets are. In addition, Schultz will pay Django a portion of his bounty profits as long as he helps him.

Django and Schultz make a formidable duo. Schultz smoozes the big bad slave-owners with ridiculous propositions; just enough to get their attention. And as soon as they see what they came for, they spring in to action. For Django, it’s not just the money. It’s the added satisfaction that he’s taking down the same type of people that worked, ridiculed and tortured him.

As an added reward for his help, Schultz promises to help reunite Django with his wife Broomhilda. Broomhilda is sold separately at a giant slave auction to a nefarious man by the name of Calvin Candie (played with southern delight by Leonardo DiCaprio). Django and Schultz make the trek to his plantation, the cleverly named “Candieland”, in order to run an intricate scheme to take back Broomhilda.

Needless to say, the scheme goes awry, followed by two big action scenes to help close out the film. In typical Tarantino style, no baddie is spared in any way, shape, or form. To call it “carnage” might be taking it a bit lightly.

While a typical director would aim for total camp or screw up the execution beyond belief, it helps for Tarantino to have the right cast. Foxx is ice cold as Django, and Waltz should be gunning for his second Supporting Actor nom as the wordly Schultz. And I’m hard pressed to find a role which finds Leonardo DiCaprio having as much fun as he is here. The film may run a tad long, but you don’t feel like any time is being wasted on you. The dialogue is superb like in most Tarantino features.

Then there’s the slavery thing. There’s no denying that Spike Lee has a bone to pick with Tarantino, especially considering his stink over “Jackie Brown”. But his opinion that the film shames his African ancestors who experienced slavery first hand is a bit reaching. (For obvious reasons, I’m not diving into this particular argument. This New Yorker article has a pretty good rundown and differing opinion on the whole subject.)

So is “Django” truly a revenge fantasy in the same vein as “Basterds”? Yes and no. No, because it reaches for much more. The Django-Broomhilda romance is delivered in a such a way that you feel that Django is more after her rather than taking down some rotten Southern white men. If anything that “Basterds” lacked, it was something greater in addition to just killin’ Nazis.

But like “Basterds”, “Django” is the type of film that improves in my mind the more I think about it. (The exact opposite of that would be “The Dark Knight Rises”.) “Django” might not be Tarantino’s very best, but it’s another movie in his recent mean streak. Pun intended.