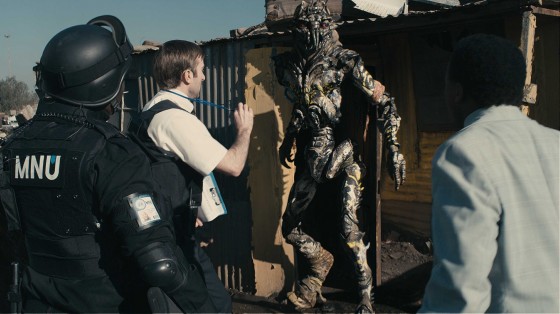 This year we will see Neill Blomkamp’s Elysium, which is the follow up to this masterpiece of sci fi action, District 9.  Based on his short “Alive in Joburg”, District 9 tells the story of an alien spacecraft that arrives above Johannesburg, South Africa and has apparently run out of energy, forcing the aliens, nicknamed Prawns, inside to be set up in a refugee camp that becomes the slum, District 9.  Sharlto Copley exploded onto the scene as the “hero” Wikus Van De Merwe, who works for the corporation handling the aliens but gets infected by some alien chemicals and starts mutating into one of them.  He gets help from a Prawn named Chris Johnson, who says he has a way to fix Wikus in exchange for getting their vial of fuel back from MNU.  The special effects are fantastic and it features one of the best final action sequences of recent years and it was nominated for Best Picture.  If you have never seen it, stop what you are doing and watch it right now, in full, below.